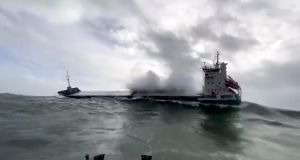 The Lily B freighter had sailed from Brunsbüttel at the mouth of the Elbe in northern Germany to Waterford when it lost power coming out of Waterford port. Photograph: Causeway Coast Community/Twitter

A major rescue operation is under way off the southeast coast to prevent a freighter, with nine crew aboard, from drifting on to rocks after it lost power in rough seas on Tuesday.

The Lily B, a 3,000-tonne freighter, had sailed from Brunsbüttel at the mouth of the Elbe in northern Germany to Waterford when it lost power coming out of Waterford port at around 2.30pm on Tuesday.

The 100m ship, which is registered in Antigua and Barbuda, called for assistance as she was drifting towards Hook Head in Co Wexford in Force 6 southwesterly winds that were throwing up four- to five-metre swells.

An operation is currently ongoing off Hook Head, Co. #Wexford. Rescue 117 and multiple lifeboats are involved. The vessel ((Lily B) is powerless and is being pounded by heavy southeasterly winds. @KMcAuleyPhoto pic.twitter.com/YMj2aWUElv

A rescue operation was launched by the Irish Coast Guard Marine Rescue Centre based in Dublin and the Waterford Rescue 117 helicopter has been dispatched to the scene.

Three RNLI lifeboats, from Rosslare and Kilmore Quay in Co Wexford and Dunmore East in Co Waterford, have arrived on scene and managed to get tows on board and are holding the ship from drifting towards the head.