Brexit: May expected to push for a ‘customs partnership’

Ireland is likely to support UK proposal at EU summit 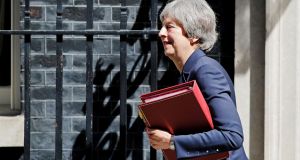 British prime minister Theresa May. Irish support for her “customs partnership” proposal will be forthcoming only if she faces down the hard Brexiteers in her cabinet. Photograph: Tolga Akmentolga Akmen/AFP/Getty Images

The Government expects British prime minister Theresa May to push ahead with proposals for a new “customs partnership” which it believes could pave the way for a soft Brexit, and which Dublin will support at next month’s European Union summit.

The Irish Times understands the British government has told Dublin about the proposals, and the Government is likely to back Ms May at the summit.

However, Irish support will be forthcoming only if Ms May faces down the hard Brexiteers in her cabinet and her government shows progress on a common understanding of the border “backstop”, the commitment to maintain an open border even without agreement.

Downing Street has told Dublin it has problems with the backstop, but that Ms May’s proposals on a customs partnership would lessen the importance of the arrangement.

Government sources agree that the potency of the backstop would be decreased and that it would become “less important” for Ms May if she put forward a customs proposal. It would make it “less offensive” to the DUP, which supports Ms May’s government.

“For her, it makes the prospect of it [the backstop] ever being invoked lower,” one well-placed source said.

While further work would be needed on any customs proposal – even if Ms May gets it through her cabinet – it would “point to a direction of travel” from the UK government of where it wants to go, say sources. It would not be “a solution in itself”.

The proposal would see British officials collect tariffs on behalf of the EU for any goods coming to the UK that were subsequently destined for an EU member state.

The EU has already rejected this model, and a willingness to look afresh – even if it only “provides the basis” for future talks, according to one source – will be seen as a softening of the Irish and EU position.

Earlier this week, Taoiseach Leo Varadkar said of Ms May’s customs proposal: “The view of the EU is that it isn’t workable in its current form but it is something that perhaps we could make workable.”

The backstop – which would ensure no divergence in customs and trade rules between the Republic and Northern Ireland without agreed solutions on how to avoid a hard border – was agreed in principle in December, although the UK has rejected the EU’s legal interpretation of it.

However, in tandem with the customs proposal, the British government must “at a minimum” table its own interpretation of the backstop in the weeks before the June summit.

It was further argued that the tabling of a customs proposal would make it easier for the backstop to “go green” – be agreed – and this would “leave space for the legal experts” to iron out the details over the summer.

In effect, the mooted move would mean the EU taking Ms May’s proposal seriously in order to help her agree to the backstop.

Senior Government figures believe the DUP’s priority is now that the North should be treated no differently to the rest of Britain, even if this means staying in a UK-wide customs partnership which would replicate many of the features of the customs union.

DUP leader Arlene Foster has said Northern Ireland must move in “lockstep” with the rest of the UK.

Although Ms May has said she could not accept the EU’s interpretation of the backstop, the Government is adamant the fallback option must be included in any Brexit deal. “We still need the backstop,” said a senior Government source.