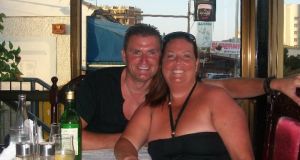 Paul Reck with his wife Catherine, who dies from cancer in 2012 after a delayed diagnosis.

The daughter of a woman who died from cancer after receiving incorrect smear test results says she feels “robbed” of her mother.

Grace Rattigan took to Facebook on Friday night to say her mother, Catherine Reck, was one of the 17 women who died from cancer due to a delayed diagnosis.

The controversy over the CervicalCheck smear tests began more than two weeks ago after Limerick woman Vicky Phelan settled her action against a US laboratory that gave her an incorrect smear test result in 2011.

Ms Phelan was diagnosed with cancer three years later, and a 2014 audit showed her original smear test to be inaccurate – but she was not told until September 2017.

It subsequently emerged that an audit of smear tests showed that 209 women across the State could have received an earlier intervention and 162 of them were not told the outcome of the audit. Of the 209 women, 17 are dead.

Ms Rattigan, who runs a blog about parenting, said an audit of cervical tests showed the smear Catherine received in November 2010 was incorrectly reported.

“It was not low grade abnormalities, it was in fact exceedingly high grade Abnormalities and needed immediate attention.

“We have now been informed that had this been reported correctly the colposcopy would have been requested immediately and would have been conducted no later than January 2011.

Conversly, as a result of this discrepancy, the colposcopy was not carried out until August 2011. Seven months later, meaning treatment didn’t begin until October 2011.

“Almost a year after the incorrect smear test result was received. Things could have been very different for all of us right now.”

Ms Rattigan said her mother’s doctor was made aware of the incorrect smear result in 2016 but was advised by CervicalCheck not to inform the family.

“We are numb, we are angry; we have been brought back to the start of a long and difficult grieving process. This changes everything, all of the “what if’s” suddenly feel different,” Ms Rattigan said.

“We want answers for Catherine, her family (us) and the other women and families who have been failed. We want accountability. Above all else we want change.

“We never want this to happen to any woman or her family in this country again.”