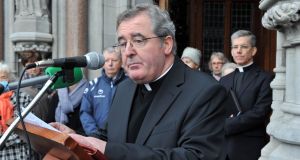 The Irish Catholic Bishops’ Conference is to divest from fossil fuels in keeping with a global pledge by Pope Francis in order to combat climate change.

The leading Catholic charity, established and administered by the Irish hierarchy, has total investments of between €3 and €4 million in a range of companies including some gas and oil. The conference has now decided to divest its resources from such fossil fuels.

“In doing so, we are responding directly to Pope Francis’s call in his 2015 encyclical letter Laudato Sí on care for our common home by moving away from fossil fuels ‘without delay’,” said Bishop Crean in a statement.

“Our decision was taken at the summer 2018 General Meeting of the Irish Catholic Bishops’ Conference Meeting in Maynooth. It relates to investments held by the Bishops’ Conference at a national level and involves divestment from the top 200 oil and gas companies within five years.”

Bishop Crean said that as Chairman of Trócaire, he was delighted to make the announcement on the eve of Pope Francis’s visit to Ireland, given Trócaire’s role in tackling the disruption that climate change is causing to the environment and consequently people all over the world.

“Over the past decade we have seen more intense storms, devastating floods, prolonged droughts and higher temperatures. The impact in terms of human suffering to families is devastating. Climate change is already leading to forced migration, separation of families and increased pressure on resources.

“Avoiding further climate change and protecting our common home requires a major change in direction, as Pope Francis outlines in Laudato Sí. In particular, it requires a major shift in our energy and investment policies away from highly polluting fossil fuels towards cleaner renewable energy.”

Bishop Crean said that while the decision by the Bishops’ Conference was modest in terms of financial resources, it was more than just symbolic and heralded a growing realisation that everyone has a part to play in fighting climate change.

“It is about joining the growing social movement, led by young people across the world, calling for the realignment of our financial policies to safeguard their future. It makes good sense and it is the least that we can offer our future generations,” he said.

“Together with our brothers and sisters in the Church of Ireland, and with many religious congregations in Ireland that have already divested, we now call on all faith organisations at home and abroad to consider joining the global divestment movement.”

In May the Church of Ireland General Synod made a decision to divest its resources from fossil fuels while internationally some 95 Catholic organisations, including six Irish religious congregations, have made divestment commitments to date.

These organisations include Caritas Internationalis, a Vatican-affiliated humanitarian assistance organisation, Catholic banks with €7.5 billion on their balance sheets, and dozens of religious orders and lay movements, said Bishop Crean.

A number of Irish educational institutions including Trinity College Dublin, Maynooth University and The National University of Ireland, Galway have already made similar commitments to divest any resources they have invested in fossil fuels.

Last June Dáil Éireann passed a private members bill which, if passed through the Seanad, will see the country become the first to fully divest its sovereign wealth fund, the Irish Strategic Investment Fund, from all fossil fuels, and preclude future such investment by law.