Residents and firms express fears over effect of traffic restrictions 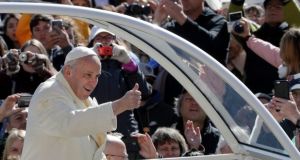 Widespread traffic restrictions across Dublin to accommodate the visit of Pope Francis, including more than 50 road closures, elicited just seven objections from members of the public and businesses.

The bulk of the closures kick in on Saturday with large parts of the north inner city closing from noon to 4.30pm or 5pm, while Sunday’s road closures mostly run from 6am until 11pm.

The closures were advertised by Dublin City Council on August 3rd and the public had until August 9th to raise concerns and make objections. Just five individuals and two businesses submitted objections to the road closure plans.

One resident in Blackhorse Avenue beside the Phoenix Park said they would be “effectively cordoned off and locked in my estate” on Sunday and that usual activities such as “indulging in fitness and leisure activities” would be impossible.

“The closing off of entire suburbs of the city in this manner is unprecedented and unwarranted for such an event and inflicts unnecessary hardship on local residents, effectively making them prisoners in their homes,” they said.

A resident in White’s Road near Farmleigh said the closures were excessive given that Mass in the park was not until late afternoon on Sunday.

“We have just had Prince Harry restrictions. We have had numerous road races . . . Bloom, Ed Sheeran, now the pope. It is unfair, excessive and unnecessary.”

One unnamed business said the city centre road closures and the restrictions on public transport would “severely impact on our business”.

Car park operators Park Rite said it was “extremely concerned” at the impact the closures would have on its car parks at Fleet Street, Irish Life, Ilac Centre, IFSC and Smithfield Market.

“This will have a significant negative impact on the trading figures of the car parks,” it said. The company asked if it would be compensated for these losses. However, the council said: “Dublin City Council does not provide compensation for temporary road closures.”