Belfast society seeks to get museum status for Troubles collection 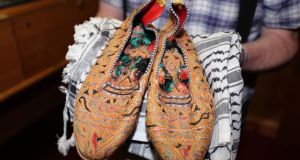 A pair of shoes reputedly given to the IRA’s Joe Cahill by Col Muammar Gadafy. Photograph: Niall Carson/PA Wire 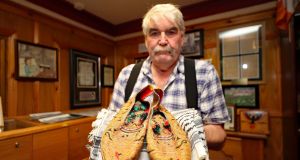 A collection of Troubles-era artefacts that includes shoes reputedly owned by Colonel Muammar Gadafy is attempting to secure official museum status ahead of a major expansion.

Over the last five decades, the Roddy McCorley Society in west Belfast has amassed a large number of items related to the conflict and associated with the republican tradition.

It includes decorative shoes the Libyan dictator apparently gifted to IRA leader Joe Cahill during a visit to his North African regime to secure arms for the Provisionals.

Among the weaponry the IRA obtained from Libya were tonnes of Semtex explosive used in some of the most notorious bomb attacks of the conflict.

Nine years on from Gadafy’s death, relatives of those killed continue to campaign for compensation from the current Libyan authorities.

The Troubles collection also includes a bed and blanket from the /Maze prison and a badly damaged British army issue rifle a member of the public apparently found close to the site of the Narrow Water bombings which killed 18 soldiers in 1979.

The society has already secured Belfast City Council backing to transform the collection’s present home, in three rooms above the Roddy McCorley Social Club on the Glen Road, into a purpose-built museum facility.

As part of the process it is hoping to achieve museum accreditation. The society recently met officials from National Museums NI to discuss its ambitions.

Society committee member Kevin Carson said the official status would enable it to loan and swap artefacts with other museums throughout Ireland.

“We started in one room and then we took over a second room and now we have a third room and, even at that, we haven’t enough space to put on show all the stuff we have,” he said.

“We do look forward to getting museum status. Me and other members of the committee have travelled the length and breadth of Ireland to tie up with other groups and museums and collectors to hope in the future to actually exchange parts of our exhibitions back and forward, so stuff from Belfast could be on show in Cork or Mayo or Derry or Donegal, but we need to have proper museum status.

“We are going through the process at the moment with meeting all the groups that would be great assistance to us to turn ourselves into a museum.”

The Roddy McCorley Society was formed in 1972 as a vehicle to raise funds for the families of republican prisoners.

The collection of artefacts began with art crafted by those prisoners, such as Celtic crosses and leather wallets.

While the society tells the story of the Troubles very much through a republican prism, the collection also includes several loyalist items, donated by ex-prisoners from the other tradition who have visited as part of peace process reconciliation initiatives.

Mr Carson said Gadafy’s shoes were “very valuable” and continued to generate significant interest among visitors. A TV crew from the Middle East visited during the summer to film Mr Carson recounting the story of the shoes.

“Joe Cahill, one of our major republican personalities over the years, had been in Libya on a number of occasions to meet Gadafy and on one of the occasions he met Muammar Gadafy in the desert after a great long journey in the sun and heat and dryness, because Gadafy in those days could never stay in one spot,” he said.

“Joe on that occasion was presented by Muammar Gadafy with these slippers as a souvenir of this visit.”

The director of National Museums NI, Kathryn Thomson, said: “The story of our recent past is one that is distributed through a network of museums, visitor attractions, and tours across Northern Ireland.

“At National Museums NI we work with this network as part of the development and programming of important exhibitions such as the Troubles & Beyond at the Ulster Museum.

“Where relevant we are always willing to offer curatorial and other expert advice and support to community led initiatives.

“Within this context we welcomed the opportunity to visit the Roddy McCorley Museum recently and look forward to seeing their project develop.” – PA