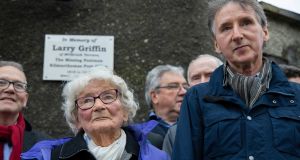 Bridie Griffin with her son Willie, in front of a plaque unveiled for the 90th anniversary of postman Larry Griffin’s disappearance. Photograph: Patrick Browne/The Irish Times

The descendants of a postman who disappeared 90 years ago in Co Waterford have said they hope no “ill feeling” remains in the community, which was divided by the case.

Larry Griffin vanished while doing his rounds on Christmas Day in 1929. He was last seen in the seaside village of Stradbally.

A resulting case brought by the State saw 10 people charged with his murder including two gardaí, a teacher and a publican. All 10 were subsequently acquitted when the chief witness withdrew his evidence.

Following a Mass marking the 90th anniversary of Larry Griffin’s disappearance in his native Kilmacthomas on Friday, a plaque was unveiled as tribute to him at the village’s former post office.

The commemoration was organised by An Post and attended by the Griffin family, including the postman’s daughter-in-law Bridie Griffin, who is 99.

“I remember all the commotion, it was massive at the time and was a very unusual case altogether,” she said. “The thing about it is, what happened might have been an accident but it was the fact that the body was concealed – that caused the hurt.”

The failure to ever find Larry Griffin’s body meant his wife, Mary could never avail of the widow’s pension, which caused financial hardship for the family.

Ms Griffin said the case was “too hard” for her husband Jack, the postman’s son, to speak about. He was 18 when his father disappeared.

“Christmas wasn’t an easy time in this house for years,” said Ms Griffin. “It’s the younger generations, the grandsons and granddaughters who have been able to speak about it all. They’re the innocent parties.”

However, Larry Griffin’s great-granddaughter Laura Griffin (28) said the pain caused by the case “did ripple down the generations” in the family.

However, she said now “there’s no ill feeling from the Griffin family and there’s no bad blood between us and Stradbally”.

The author of a book on the disappearance, Fachtna Ó Drisceoil, said the story – once considered a taboo subject in Co Waterford – is an example of how “Ireland is changing”.

Rosemary Brown, whose grandfather George Brown was postmaster in Kilmacthomas at the time of the disappearance, recently discovered a bundle of handwritten letters sent between him and a relative in 1930.

In them, Brown discusses theories surrounding the case and also laments his missing postman, who had once been solider in the British army.

The Griffins still hope that Larry Griffin’s body will one day be located, but admit the chances are slim.

However, Laura Griffin said “it may be the case that the truth really has gone to the grave in that as there is nobody left alive to tell us”.