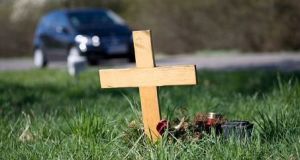 Liz O’Donnell, chairwoman of the RSA, said it is “deeply saddening” that road deaths had risen in 2019. File photograph: Getty

Almost 150 people died on the State’s roads in 2019, according to provisional figures from the Road Safety Authority (RSA).

Drivers comprised the highest number of road users who died last year, with 81 motorist deaths up until lunch time on December 31st, a 45 per cent increase on the 2018 figure.

The data also show that 27 pedestrians, 16 passengers and 16 motorcyclists died on Irish roads.

There were also eight pedal cyclists who died in 2019, down one from the nine cyclist deaths in the previous year.

The number of road deaths in the Republic has been consistently under 200 since 2010, though there have been a few fluctuations in recent years.

Minister for Transport Shane Ross expressed his condolences to the families and friends of those who had lost their lives in road fatalities in 2019.

“The only way to respond to these needless deaths and injuries on our roads is through action, not words. While families and friends grieve the loss of their loved one, we must as a society all respond with deeds to prevent it happening to others,” he said.

The Minister called on ordinary road users to take “greater responsibility for our actions when using the road”.

“We can do this by slowing down, not driving while impaired through drink, drugs or fatigue, by not driving while using a phone, by wearing a seatbelt and always sharing the road more carefully with pedestrians and cyclists,” he added.

Liz O’Donnell, chairwoman of the RSA, said it is “deeply saddening” that road deaths had risen in 2019.

“We must respond to this increase the same way we have responded to previous setbacks. Rather than being disheartened, it should spur us and our road safety partners into renewed effort,” she said.

“Firstly, an additional 180 gardaí have been selected to be assigned to roads policing duties in early 2020. Secondly, the rollout of the new mobility app will be stepped up so that by the end of 2020 there will be in excess of 4,000 devices in the hands of front-line gardaí,” Mr Sheahan said.

“The new mobility app will revolutionise the way roads policing is carried out in this country.”

3 Q&A: What are the new coronavirus variants and should we be worried?