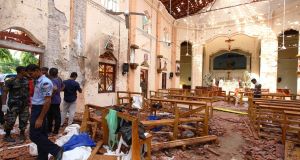 These incidents included terrorist attacks in Sri Lanka and Kenya, protests in Hong Kong and political instability in South America.

Medical emergencies were the most common cause of contact, with 270 people requiring assistance for that.

Over 260 families required the support of the Department following the death of a loved one abroad, while 243 people needed help with overseas arrests.

Some 112 people were victims of crime in another country, while72 families required help tracing a missing person.

The Department assisted these people through its consular office in Dublin, in its 80 embassies and consulates-general, and in the 94 honorary consuls around the world.

One of the most notable cases in which the Department provided assistance was that of teenager Nora Quoirin, whose body was found in a Malaysian rainforest after a 10-day search.

In April 2019 a series of terrorist attacks on churches and luxury hotels in Sri Lanka left 259 people dead, many of them tourists.

The Department of Foreign Affairs advised people to stay indoors and obey the curfew that was in place at the time, saying they could contact the Honorary Consul in Colombo for assistance if needed.

“Irish citizens continue to travel more often and more widely than ever before - meaning a greater frequency and complexity of consular cases. This presents ever-growing challenges in providing assistance for Irish citizens who get into difficulty overseas.

“While most journeys overseas go smoothly, the 2019 statistics show that things can and do go wrong and that it is important to be prepared. As people consider travel plans for the year ahead, I urge them to get comprehensive travel insurance.”