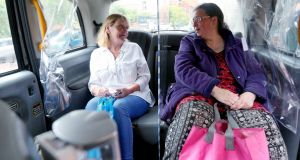 Anne Blake and Mary Magee share a Belfast black taxi which has been fitted with social distancing screens, payment windows and hand sanitiser as part restrictions to prevent the spread of Covid-19. Photograph: Stephen Davison/Pacemaker

In Belfast, the black taxis are back.

“It’s my first time back in town since the lockdown,” says passenger Anne Blake. “It’s great to see them back. I thought, thank God. It’s a wee bit of normality.”

“As soon as I heard the taxis were back I was in town,” adds Mary Magee. “I’ve been back four times, just doing a bit of shopping.”

The community taxi service – which runs set routes in west and north Belfast on a shared fare basis similar to a bus service – returned to the city’s streets on Monday. It was suspended in mid-March due to the coronavirus pandemic, the first time in the taxis’ almost 50-year history that they had been off the road.

“To west and north Belfast, it’s part of our lives,” says Barr. “It enables a lot of people who live in the outer housing estates to travel freely without having to wait, or where there’s no public transport, or very little, it gives people freedom.”

Years ago there would have been three more sitting on people’s knees, and two on the floor

At the depot on King Street in the city centre, socially distant queues are marked out with ropes and signs; inside the taxis, capacity has been reduced from six to four, and passengers are asked to use hand sanitiser and wear masks.

A Perspex screen is around the driver – with a hatch for payment, preferably contactless – and plastic curtains which can be drawn to protect passengers in the back.

The vehicle smells strongly of alcohol-based sanitiser. Driver Hugh Jordan proudly demonstrates his own innovation for contactless cash payments, a length of flexible pipe “meant to be for a sink”.

Passengers can drop their money into the tray via the tube; if he twists it the other way, he can use it to return their change. The money is sparkling. “It’s been sanitised too,” he adds.

“This is great,” says Magee, pulling over the plastic. “They’re really looking after people.”

Home care worker Mairead Campbell agrees. “It’s great to have them back, they’re so handy. They’ll stop wherever you are on the road.

“I do feel sorry for the drivers, though, only being able to carry four passengers. Years ago there would have been three more sitting on people’s knees, and two on the floor. Plus you always find somebody to talk to when you’re in a black taxi.”

Jordan feels the same. Like all the drivers, he is self-employed; he is “relieved” to be back – not least, he says, because it will get him out of the house.

“It’s different now, with masks and screens, but it’s still getting back to some sort of normality and being able to serve the community.”

This is important, explains retired driver Hugh Mullan. During the Troubles, he says, the black taxis kept going “no matter what”; inside the depot is a plaque to eight colleagues. “Murdered in the service of their community,” it reads.

As bus services were frequently suspended in nationalist areas during the Troubles, black taxis filled the public transport gap.

The majority of visitors who use Taxitrax are from the UK and Ireland; the summer can be salvaged, he says, if the tourism and hospitality industry is allowed to reopen at the same time as the Republic’s, on June 29th.

“The whole island needs to open up for tourism. If the South opens and we don’t, we will be left behind.”