Study aims to harvest information on brain tumours from 9,000 Irish patients, many of whom are dead 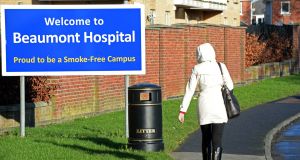 Beaumont Hospital has extended the deadline to opt-out of a project to harvest information on brain tumours from 9,000 Irish patients. The new deadline is September 14th. Photograph: Eric Luke

Researchers at Beaumont Hospital have extended the deadline to opt-out of a project to harvest information on brain tumours from 9,000 Irish patients, many of whom are dead.

The research is being run in conjunction with State-backed company Genomics Medicine Ireland (GMI), which is owned by a subsidiary of a multinational genomics data company. GMI is aiming to gather the genomic information of hundreds of thousands of Irish people.

The extension follows a call by the Minister for Health, Simon Harris, in the Dáil on Thursday to extend the deadline, which had been set for Friday, due to the impact of the coronavirus pandemic.

A spokesman for the hospital confirmed it would extend the deadline for three months, to September 14th.

The study was previously rejected by the State’s Health Research Consent Declaration Committee (HRCDC), which examines applications for research projects where patient consent cannot be obtained. That decision was overturned on appeal.

The HRCDC had highlighted concerns about the potential for project data to be shared with “unknown international third parties”. It found the “involvement of a for-profit organisation processing personal data introduces a higher risk that data subjects may have a deeper concern for their privacy rights”.

The involvement of GMI in the project, the company said, was “to support Beaumont by generating whole genome sequence data which will be returned to Beaumont for their research purposes”. Beaumont has said the project will improve overall clinical understanding of brain tumours and lead to faster and more accurate diagnoses. The project is based on an archive of brain tumour tissue from 9,000 patients, extending over a 30-year period. Only about 15 per cent of the subjects are alive.

When the decision was overturned, one of the conditions attached was that Beaumont and GMI had to conduct a publicity campaign to raise awareness about the capacity to opt out.

However, in recent weeks there have been calls to delay the deadline, due to the impact of the virus. Róisín Shortall, the Social Democrats co-leader, on Thursday called in the Dáil for research in the area to be “carried out under the auspices of a State body”, rather than GMI. She said the project “raises huge ethical, privacy and public interest issues”.

In response, Mr Harris said while he had no power to delay the deadline, he believed it should be, and had instructed the HSE and his office to contact Beaumont over the matter. He said “where there is an opt-out rather than an opt-in”, there is a “greater burden” on researchers to ensure the opportunity to opt-out exists.

Ms Shortall welcomed the decision to extend the deadline for the study. “Let’s hope this extension will now allow for a fuller public debate on the ethical, privacy and data protection issues involved in this project.”