Busiest time for city centre shoppers was between 11am and 3pm, new figures show 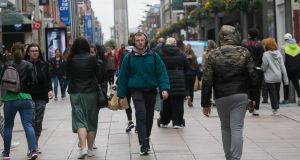 More than 160,000 people came into Dublin city centre each day this week following the easing of Covid-19 restrictions with the numbers climbing steadily between Monday and Friday as more retail outlets opened for business.

According to figures released by business umbrella group Dublin Town and Dublin City Council the busiest time for shoppers was between 11am and 3pm each day while the newly installed public toilets across the city were used 1,400 times each day.

At the start of the week just 26 per cent of the shops in the city centre were open with the number doubling to 52 per cent by Friday morning when Penneys became the latest of the big retailers to resume trading.

‘Over the course of the week it’s been great to see people come back to the city centre,” said Richard Guiney, chief executive of Dublin Town. “There has been a nice, steady, and leisurely pace.”

He said footfall over the course of the day had been “remarkably consistent” and shoppers had cooperated and worked well with store staff.

Public transport was operating at just 20 per cent of its normal capacity as a result of social distancing measures but chief executive of the National Transport Authority Anne Graham said it had operated “very smoothly” this week.

She expressed the hope that the public would “continue to only use transport for necessary journeys”. She also repeated the NTA’s call for people to wear face coverings or masks while on public transport.

Assistant Garda Commissioner Pat Leahy also called on the public to continue to be “conscious of the guidelines” in place ahead of the weekend.

People are being asked to observe the request to ease the city open, plan visits and to be mindful of others. Unnecessary journeys are to be avoided and people are being encouraged to walk or cycle where at all possible while always observing social distancing.