Covid-19: Dublin has fewer than 100 weekly cases for first time since March

HSE chief executive Paul Reid has said that they are continuing to see very positive trends in relation to the measures taken to deal with the Covid-19 pandemic. Video: HSE Live 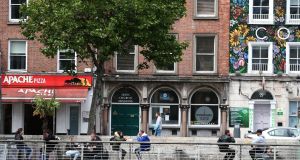 People enjoy a coffee on the boardwalk in Dublin as Covid-19 restrictions are eased. Photograph: Laura Hutton

Last week was the first since the start of March in which Dublin had fewer than 100 weekly cases of Covid-19 diagnosed, the Central Statistics Office has confirmed.

The deaths of a further three people diagnosed with Covid-19 were reported in the Republic on Friday.

This brings the total number of fatalities in the country to 1,705.

The National Public Health Emergency Team also recorded a further 13 confirmed cases of coronavirus, bringing the total number of cases in the country since the pandemic began to 25,250.

One death was denotified by the Health Protection Surveillance Centre. The new totals reflect this.

Cities continue to account for an outsized proportion of total Covid-19 infections, with 44 per cent of all cases occurring in urban areas which account for one-third of the population. Dublin continues to be worst affected in terms of deaths, with 11 in the last week. It is the only county to record more than five new deaths each week for the past four weeks.

Almost 90 per cent of Covid-19 patients who required intensive care had an underlying condition.

However, the CSO data supports the wider experience that the virus proves most deadly for elderly people, with the median age of all deaths associated with Covid-19 coming in at 83.

So far, 413 people have required treatment in ICUs. Of all those who were hospitalised, 62 per cent had an underlying condition, but 87 per cent of those in intensive care suffered from one. Men significantly outnumber women in terms of ICU admissions, accounting for 68 per cent of the total.

Meanwhile, the Health Service Executive has spent an additional €400 million on Covid-19 related costs so far, and is projecting a possible €1.8 billion cost for treating the disease to the end of the year.

The biggest drivers of cost are personal protective equipment (PPE) and testing and tracing, according to HSE chief executive Paul Reid.

As a result of the extra spending, the cost base of next year’s HSE service plan will be significantly increased, he warned.

Mr Reid said the cost of PPE, which is expected to be about €1 billion this year, had been driven by the massive premium that had to be paid for scarce equipment and the cost of supplying large volumes to the “HSE family” and beyond, to the wider healthcare system.

Next year’s winter plan would be very different from this year’s, he said, and the HSE corporate plan would also have to be redesigned.

Mr Reid said he was concerned about capacity for next winter, especially the need to step this up quickly. “We will need extra capacity in a way he hadn’t got last year. We should be at 80 per cent [capacity] but we’re well over that at present.”

Services need to be redesigned, sustainable models of primary care and the provision of elective care has to be addressed, Mr Reid said.

Time-frames for plans would have to be “recalibrated” from existing 10-year spans, and capacity will have to be built to cope with the “new reality” of post Covid-19 healthcare.

“We’re winning so far but it’s a long game,” Mr Reid said of the performance of the health service, “but now we have to develop new plans within the HSE to deliver services in a different way”.

The turnaround time for testing has significantly improved, Mr Reid said. End-to-end turnaround from the time a person reports symptoms to a result is now a median of 1.8 days, down from two days the previous week.

For tests processed in hospital labs, the turnaround time is 1.5 days; in the community, the average time is 2.3 days.

Some 86 per cent of tests are processed end-to-end within three days, just short of the 90 per cent target.

Last week, 1,500 calls were made as part of the contact-tracing operation, and 255 close contacts were sent for testing. Of these, 14 tested positive, and 90 per cent of this group were asymptomatic.

Despite starting with a low number of critical care beds by international standards, hospitals were able to treat all patients needing care and were at no point overwhelmed.

The crude mortality rate of those who were admitted to intensive care was 20 per cent, which compares quite well internationally, she said. Ninety-nine per cent had underlying conditions.

However, next winter will be “difficult” so it was vital to recruit critical care nurses and create new capacity, she said. Ultimately, critical care capacity needed to be doubled.

There are currently 226 patients in hospital with confirmed or suspected Covid-19, including 32 in intensive care.

Some 734 beds in hospitals are free, including 91 in intensive care, according to HSE chief operations officer Anne O’Connor.

The future of the Citywest isolation facility, where just 16 patients are being cared for by 21 staff, was being considered in the context of the winter plan, she said.

1 Major Dublin restaurant group threatens State with legal action over Covid-19 restrictions
2 Covid-19 infections from funeral led to a third of one restaurant’s staff self-isolating
3 'The Bill is there to give people a more dignified end,' says man (53) with terminal cancer
4 Coronavirus: 442 new cases as stricter house visitor limits introduced nationwide
5 Thousands may have received higher Leaving Cert grades than they should, Minister says
Real news has value SUBSCRIBE