Mallon says argument for unity must be made without threats 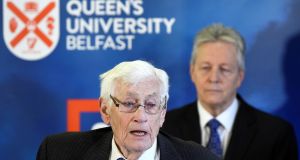 Seamus Mallon speaks as Peter Robinson looks on at an event to celebrate the 20th anniversary of the Belfast Agreement at Queen’s University Belfast, April 10th, 2018. Photograph: Clodagh Kilcoyne/Reuters

Former Northern Ireland deputy first minister Seamus Mallon has said nationalists must be able to persuade unionists that Irish unity will be a good thing, without making them afraid of constitutional change.

Over a number of separate contributions at the “Building Peace” event in Queen’s University, Belfast today, Mr Mallon, who was also deputy leader of the SDLP, said the question of Irish unity must be looked “straight in eye”.

“I want to be able to persuade unionism that Irish unity would be a good thing for us and them. I can’t do that if they are afraid. If they can’t breathe, if this threat is always there, sometimes openly and sometimes not, that they don’t belong here.”

At earlier press conferences, he criticised some for using Brexit to push for a referendum on Irish unity that would be settled by a narrow majority. He said two firm camps in Northern Irish politics – read to be Sinn Féin and the DUP – have at times operated a “zero sum” game.

Mr Mallon also recounted the murder of a man he knew during the Troubles.

“A man I knew well, a good man, shot dead in his tractor. Shot dead because he was a member of the British occupying forces. He was a reserve police officer, two nights a week.”

He asked if the soil into which the man’s blood seeped was “Irish soil or British soil, or the soil of people who belong on this island?”

Attempting to persuade people about unity without threats will “require courage”, he said.

“I don’t care what they call it, as long as it has one name: home,” Mr Mallon added.

Mr Trimble said that Northern Ireland needs to move away from identity politics, and that the participation in Northern Ireland politics of national parties from both the UK and Republic of Ireland would help.

“I have no objection to there being an Irish national party as well. If you want to see that sort of move, that is the sort of thing you to do.”

Mr Trimble repeated his view that there is no link between the Belfast Agreement and the Brexit process, but expressed hope that a deal that is satisfactory to the UK, Ireland and the EU can be agreed.

“If we look at what has occurred since, by any measurement, Ireland is in a better place,” Mr Adams said of the past 20 years, claiming Northern Ireland had previously been a “one party” and “orange State”.

He predicted a new deal will be struck between Sinn Féin and the DUP to restore Stormont and said current arguments were over policy rather than constitutional issues.

Mr Robinson said, however, that a “more broadly based agreement may be necessary”.