Fodder shortage will last at least another 10 days, says co-op

Dairygold importing 4,500 tonnes of feed from UK mostly for farmers in Munster 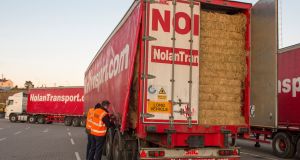 One of the country’s last co-ops has predicted the fodder shortage will last at least another 10 days.

Dairygold has sourced 4,500 tonnes of fodder from the UK which it will distribute to 500 farmers mostly in Munster.

Some 80 loads carrying 16 tonnes of fodder each were transported from Britain to Ireland for Dairygold farmers.

The forecast this week is for more spring-like weather following the protracted winter which has stifled grass growth. Temperatures will be closer to normal for the time of year and there will be a lot of sunshine.

However, many fields are waterlogged following torrential rain last week and soil temperatures are only beginning to return to normal.

“At the moment, we estimate that it will take at least another 10-14 days for sufficient grass supply to meet demand.”

The fodder is being sourced in the UK, but there are already indications that supplies are tightening there.

The Farmers’ Union of Wales has warned that its members are also suffering as a result of poor grass growth.

Its milk and dairy committee chairman Dai Miles questioned the export of thousands of tonnes of animal feed from Britain to Ireland when Welsh farmers were also running short.

“We fully sympathise with Irish farmers regarding the pressures they are under, but with prices already extremely high in the UK and pressures mounting in parts of Wales, the impact of the Irish schemes for our members is naturally a concern,” he said.

“Above all else, farmers in Wales need to see a dramatic improvement in the weather. Otherwise, we will have to urgently consider schemes similar to those operating in the Republic of Ireland.”

Some farmers in Wales have been importing wheat straw from Spain and France to cope with the shortage.

Prayers were said in the Catholic diocese of Cork and Ross at the weekend following the intervention of Bishop John Buckley.

The bishop said animals are dying in the fields and their owners are in great stress as a result of the difficult winter and late spring.

The bishop added: “Many farmers have approached me, asking for prayers. Over the past few weeks I have witnessed great hardship in the farming community. This is particularly true of west Cork. Let us remember them in our prayers.”

3 Vaccination of ‘high risk’ citizens against Covid-19 to begin next week, Dáil hears

UK ‘cannot be trusted’ on Northern Ireland protocol, says Coveney 16:09
Man whose wife died from cervical cancer to use settlement to fulfil wish for child by surrogacy 15:47
Vaccination of ‘high risk’ citizens against Covid-19 to begin next week, Dáil hears 15:46
Staying away is so alien to Travellers that it is ‘countercultural’ 15:21
HSE chief says ‘significant issues’ have delayed Ireland’s vaccine rollout but situation will improve 15:10