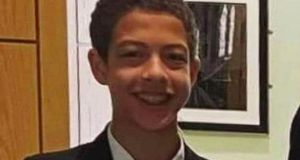 An appeal has been made for two items of Noah’s clothing - khaki green North Face coat and grey sweat shorts - which have not yet been found by police. Photograph: PSNI/PA Wire 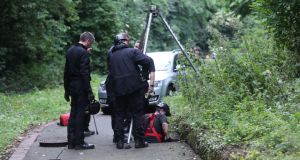 A member of the PSNI hazardous environment search team search a drain in Seaview Park during the search for missing Noah Donohoe who was last seen in the Shore Road area of north Belfast at the weekend. Photograph: Niall Carson/PA Wire

Superintendent Muir Clark said they were recovered in north Belfast following a call from a member of the public, and are now being examined by specialist officers.

He described the recovery of the laptop as “significant”, and said that with other electronic devices “that will form a major line of inquiry now as to where Noah possibly is or, if Noah was going to see someone, who that was.”

The police have not revealed the precise location where the bag and laptop were found, but Supt Clark said inquiries were ongoing as to how they came to be there.

A large-scale search for the 14-year-old has been underway in north Belfast since he went missing on Sunday.

Noah had cycled approximately 4km across the city from his home in south Belfast to north Belfast, where police believe he may have fallen off his bicycle and hit his head. He was seen discarding his clothes and cycling naked, actions which police and his family said were “completely out of character.”

Supt Clark said the police’s main line of inquiry was that Noah had fallen off his bicycle and may have suffered some form of trauma which had left him either disorientated or incapacitated.

Earlier this week he said it was still not entirely clear why Noah had gone to that area of north Belfast.

The search area was widened on Thursday to include the Antrim Road and the city centre. Noah’s school, St Malachy’s College in north Belfast, has also been searched.

Speaking at a press conference in north Belfast on Friday, Supt Clark said the main search area continues to be in the area of Shore Road, bounded by Premier Drive and Skegoneill Avenue.

“There is significant work ongoing in clearing vegetation in that area so that we can check it again,” he said, as he appealed to householders in that area to again check outbuildings, shrubbery, and any area of garden or premises where Noah might be.

“That is the key bit of our investigation at the moment,” he said

According to the Police Service of Northern Ireland (PSNI), the teenager left his home in South Belfast at about 5.30pm on Sunday. He was riding a black Apollo mountain bike and wearing a black skateboarding helmet, khaki green North Face jacket, grey sweat shorts with an emblem on one leg, a tie-die blue hoody, Nike trainers with a bright yellow tick and carrying a khaki rucksack containing a book and a laptop.

He was seen on Ormeau Avenue at 5.45pm and on Royal Avenue heading towards York Street a short time after, then on North Queen Street heading towards the Limestone Road at 5.57pm.

He was last seen cycling naked on Northwood Road in north Belfast, where police believe he dropped his bicycle and left the area on foot. There have been no further confirmed sightings since 6.11pm on Sunday.

On Wednesday police recovered his bicycle, black crash helmet, trainers, hoody and mobile phone. Police would not give the location of where they were found.

Meanwhile a 26-year-old man has been arrested in connection with social media posts about the teenager’s disappearance.

“Distressing and unhelpful” speculation and rumours had previously been condemned by the police.

Supt Clark said on Friday that police had become aware of social media posts on Thursday night, and “are content there is no truth behind their content.”

The police have issued a specific appeal for information about two items of Noah’s clothing - a khaki green North Face coat and grey sweat shorts - which have not yet been found, and for anyone with CCTV or dashcam footage, to contact them on 101 immediately.

Members of the public who believe they have significant information which could help the investigation into the disappearance of the teenager can now use the PSNI’s major incident public portal (MIPP), a 24/7 online reporting platform.

Supt Clark said: “We recognise that huge amounts of public information is coming into us, and we are extremely thankful for that. However, I want to stress that the activation of the MIPP does not mean that police think a crime has been committed. The investigation into the teenager’s disappearance remains very much a missing person enquiry at this time.

“By activating MIPP we are simply providing the public with another way in which to report what they believe to be significant information and we would ask that the public only use MIPP if they have information in relation to Noah’s disappearance”.