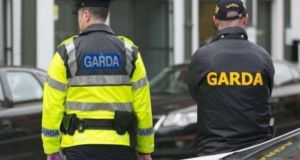 The suspect was filmed walking around a housing estate in Mulhuddart, Co Dublin. File photograph: The Irish Times

Gardaí have arrested four men and seized shotgun cartridges and cocaine during searches prompted by video footage of a young man walking around a Dublin housing estate with what looked like a shotgun.

The suspect, with a mask or scarf pulled up over his face, was filmed walking around a housing estate in Mulhuddart, Co Dublin, with the suspected firearm.

Gardaí believe the incident was staged and the man with the firearm knew he was being filmed and was effectively posing for the camera.

The short video emerged on TikTok and was shared around social media, with gardaí becoming aware of it on Wednesday. After studying the footage gardaí established the location and carried out raids targeting suspects.

While no firearm was seized during the operation, in Mulhuddart, four arrests were made after a large team of officers went into the area to conduct searches including the Public Order Unit, or riot squad, Armed Response Unit and Emergency Response Unit.

The searches were led by local gardaí assigned to Blanchardstown and Cabra Garda stations in Dublin.

“On Wednesday, June 24th, gardaí became aware of a recent video circulating on social media of an incident in the Mulhuddart area,” Garda Headquarters said of the incident and follow-up search operation.

The statement added about 9.15pm on Wednesday a large team of gardaí carried out searches in Mulhuddart, including in the Wellview area of the Co Dublin suburb, where a search operation under warrant was conducted.

“During the course of the search operation, six shotgun cartridges were seized along with suspected cocaine, pending analysis, with an estimated value of €2,800,” the Garda added.

Four suspects in their 20s, all male, were arrested; three detained in Blanchardstown Garda station and one in Ronanstown Garda station. All four men are being detained under Section 30 of the Offences Against the State Act and the Garda investigation was continuing.