Cabinet carve-up: Jobs in new government handed out but no ministry for Varadkar ally Eoghan Murphy 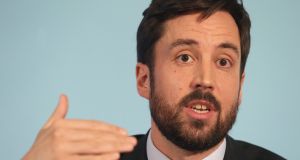 Eoghan Murphy is expected to take up a position which will link the Fine Gael party organisation and the parliamentary party. Photograph: Damien Eagers

Minister for Housing Eoghan Murphy is not expected to be a senior or junior minister in a new coalition government between Fianna Fáil, Fine Gael and the Green Party.

If the coalition takes office, Mr Murphy, one of Fine Gael leader Leo Varadkar’s closest allies, is expected to instead take up a position which will link the party organisation and the parliamentary party.

Well-placed sources said Mr Murphy has been relaxed in recent weeks, knowing what was planned for him in a new coalition arrangement. Mr Varadkar has spoken about devoting more energy to rebuilding the party and it is expected Mr Murphy will help lead those efforts.

The shape of the next Cabinet was being hammered out on Friday as members of Fine Gael, Fianna Fáil and the Green Party vote on an historic Coalition government.

The verdict of the members of the three parties will be revealed on Friday evening, either clearing the way for a new government or precipitating an immediate political crisis and a possible general election.

If the programme for government meets with the approval of party members, it will see the coming together of Civil War parties with the support of the Green Party to form a majority.

All eyes will be on the result of the Green Party vote, due to be revealed between 6pm and 7pm. And as counting of votes continued on Friday the ministries in the proposed government were being allocated.

Sources said that a number of departments – such as Health, Agriculture, Social Protection, Communications and Education – are yet to be decided.

There will be three “super juniors”, it is understood – one for each of the parties, including the government chief whip, which is likely to be a Fianna Fáil appointment, if Micheál Martin is elected taoiseach tomorrow.

Fianna Fáil is expected to take the position of Government Chief Whip, with the other two super juniors at Cabinet going to Fine Gael and the Greens. It is not yet clear which of the super juniors from Fianna Fáil or Fine Gael will take on responsibility for the roads portfolio.

Super juniors are junior ministers who don’t have responsibility for a full government department but who sit at the cabinet table.

Fine Gael will be allocated the position of deputy whip and the Greens will get assistant whip. The Department of Rural Affairs is slated for abolition, although it is not clear where its responsibilities will be transferred to.

The Greens are set to have a total of four TDs at the cabinet table if the party approves the programme for government today and the coalition is formed over the weekend. The party will have three full cabinet ministries, including Mr Ryan’s, and also a “super junior”.

Deputy Green Party leader Catherine Martin and Dublin West TD Roderic O’Gorman are also tipped for Cabinet for the Greens. The Greens are expected to have four junior ministers, including the super junior at cabinet.

The three party leaders met on Thursday and were meeting again on Friday evening amid feverish speculation about the Fine Gael and Fianna Fáil nominees for the cabinet. The two parties will have six cabinet members each, plus one super-junior each, and seven other junior ministers, it is expected.

Within Fine Gael, four current Cabinet members are viewed as certainties – Leo Varadkar, Paschal Donohoe, Simon Coveney and Heather Humphreys. After that, Helen McEntee is tipped for promotion from the junior ranks to a full cabinet job, which leaves one full cabinet job and the super junior role – with several outgoing ministers seeking each.

Either way, if the Government is formed tomorrow, Mr Varadkar will have no option but to end the cabinet careers of several long-standing Fine Gael ministers, with Michael Ring, Joe McHugh, Charlie Flanagan, Paul Kehoe, Josepha Madigan and Richard Bruton all thought by their colleagues to be unlikely to make cabinet, though some sources speculate that a role will be found for Mr Bruton, and others may fill junior minister roles.

Those close to Mr Bruton, the outgoing Minister for Communications, continued to lobby for his retention at Cabinet. A source close to Mr Bruton said he “has to be included in the cabinet”, citing his work during the government formation talks on agreeing the key 7 per cent annual average emissions reductions target sought by the Greens.

“Leo moved him to communications because of his ability to get things done without a lot of controversy,” the source said. “He got what had been a highly controversial plan to deliver broadband to every house in the country signed, sealed and delivered, and he got the first ever climate action plan done.

“He’ll have an honest to god role to play in brokering the difficult climate stuff that’ll have to be agreed to deliver 7 per cent. The first carbon budget for the first half of the decade is going to be very tricky.”

In Fianna Fáil, as the party anticipates a return to government for the first time in almost a decade, the situation is more fluid. With Micheál Martin poised to become taoiseach, it is considered certain that Michael McGrath will take the role of Minister for Public Expenditure. Barry Cowen, Jack Chambers and Dara Colleary are also tipped for cabinet or super-junior roles, while Darragh O’Brien, Anne Rabbitte, Thomas Byrne or new Kerry TD Norma Foley could also figure.

The fate of justice spokesman Jim O’Callaghan is much discussed in party circles. While he is one of the party’s more prominent TDs, his relations with party leader Mr Martin have not been easy in recent months.