Covid-19: Inquiry will be needed into State’s handling of pandemic, Varadkar indicates

In potentially his last press conference as Taoiseach, Leo Varadkar has thanked the people of Ireland for the sacrifices they made during the Covid-19 pandemic. Video: RTÉ 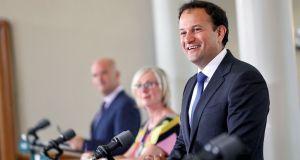 Foreign travel restrictions will be eased from July 9th with travellers permitted to move between certain countries with similar low levels of coronavirus infection.

A green list will be published detailing which countries people can travel between without having to abide by the 14-day quarantine.

Following a Cabinet meeting in Dublin Castle, Taoiseach Leo Varadkar confirmed the country will, from Monday, move to phase three in the easing of the lockdown, which will see the vast majority of the economy and society reopen.

On travel, Mr Varadkar said checks and controls would also be stepped up in airports and ports and the passenger locator form would go online. “There will be a green list of countries produced by July 9th. If you are flying or going by boat to countries that are on the green list in Ireland, the 14-day quarantine will not apply.” Mr Varadkar said.

Mr Varadkar said countries experiencing a second wave may be taken off the list. He also cautioned against people travelling abroad before July 9th: “The advice at the moment is that people shouldn’t engage in any non-essential travel off the island and that stands.”

Testing at airports has also not been ruled out, Mr Varadkar said, but that it is “far from straightforward”. Furthermore, he said if a decision was to be made on a list of accepted countries today, the Government would not be removing the 14-day quarantine requirement on travel between Ireland and the UK.

Mr Varadkar said he expected to see more “spikes” and outbreaks of coronavirus but that he did not believe the major cause of that would be a return to international travel.

The Cabinet also agreed to make it mandatory to wear face masks on public transport. Minister for Health Simon Harris said there would be sanctions for those who did not abide by the new measures and the details would be worked out over the next seven to 10 days.

From Monday, the country will move to phase three in the easing of the lockdown which will see hotels, cafes, restaurants, pubs serving meals, hairdressers, gyms, galleries and museums reopening, many sporting activities resuming and travel restrictions within the State lifted.

“From Monday we will lift travel restrictions right across this country and reunite with desperately-missed friends and family,” Mr Harris said. “It will be a week of immense emotion and joy.”

The Taoiseach has also signalled that he believes there will need to be an inquiry into Ireland’s handling of the Covid-19 pandemic when the virus is contained.

“I do think when this is all over we are going to have to have some sort of assessment or inquiry what was done right or wrong.” He said it would have been good to have done testing “sooner” in nursing homes.

“As it turned out, we were the first country in the world to test all nursing-home residents and staff.

“Had it been possible, we would have done it sooner and perhaps saved more lives in nursing homes.”

At what was likely to be the final Cabinet meeting of the current Government, Ministers also agreed to allow churches accept more than 50 people indoors.

“Mr Varadkar said the specific protocol is going to be worked out with churches and “it will be very much policed by them”.

The Government also agreed to extend the school meals programme over the summer months. Minister for Social Protection Regina Doherty said she wanted the funding to be available over the summer period “to support children who do not have access to nutritious food to enable them to continue to receive meals during the summer school holidays”.

A grant scheme to help those who are self-employed or sole traders to get back to work was also approved.

Mr Varadkar also said he believed it would be appropriate to hold a “memorial day” in honour of those who have lost their lives to Covid-19 and frontline workers but that the discussion was premature as the pandemic is ongoing.