Some 2,000 Green Party members expected to take part in ballot on entering coalition 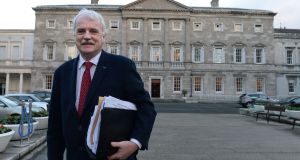 Minister of State Finian McGrath said the Green Party will have to learn how to compromise over the term of the next government if the deal passes. Photograph: Dara Mac Donaill

The result of the Green Party vote on the programme for government could be “on a knife edge,” party sources have said.

Some 2,000 members of the party are expected to participate in the internal ballot with a two-thirds majority required if the party is to enter coalition.

A number of internal sources have said that because of opposition to the plan in Northern Ireland as well as opposition among the youth wing of the party, support levels of up to 80 per cent may be needed at a constituency level.

Of those registered to vote for the Greens, some 195 are in Northern Ireland.

Counting of the votes will begin on Friday morning and a result is expected at about 6pm.

“If the numbers are close, if we just about get the required backing, there may be calls for a recount. This would take us closer to 9pm realistically,” a party source said, adding that soundings from constituencies indicated the result may be tighter than expected.

The Greens initially allowed telephone voting only for members outside the the Republic and Northern Ireland, but this week widened the eligibility to allow anyone who has not received their ballot paper to vote over the phone.

Minister of State for Disabilities and Independent TD Finian McGrath said on Thursday evening that the Green Party will have to learn how to compromise over the term of the next government if the deal passes.

“You are going to achieve certain objectives, you are not going to get everything you want. But you will achieve certain things and I would strongly recommend that they go into government because it is a very important place to be and in particular for the debate on climate change and the whole reorganisation of society.

“I think the Greens should go into government. At this late hour I would encourage them to go in because it is in the national interest, we have a Covid crisis, your country needs you. I think they should step up and do it.”

“Too many TDs are sitting on the fence and are not prepared to go into government,” Mr McGrath said.

Taoiseach Leo Varadkar also said last night that he believes the vote will pass with a higher level of support than people expect.

It is expected that both Fine Gael and Fianna Fáil will attempt to co-ordinate the announcement of their party ballots to the Green’s announcement on Friday.