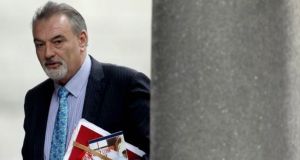 Ian Bailey (62) was convicted in absentia in a Paris court on May31st last for the murder of Sophie Toscan du Plantier. Photograph: Collins

The Department of Justice will on Monday seek to get a French extradition warrant for the arrest of Ian Bailey for the murder of Sophie Toscan du Plantier endorsed in the High Court in Dublin.

The French authorities issued the European Arrest Warrant for English national, Mr Bailey (62) in June following his conviction in Paris court on May31st last for the murder of Ms Toscan du Plantier.

The three judge Cour d’Assises in Paris found Mr Bailey guilty in absentia of the voluntary homicide of Ms Toscan du Plantier (39) at her isolated holiday home near Toormore outside in West Cork on December 23rd 1996.

And Judge Frederique Aline handed down a 25 year prison sentence to Mr Bailey - who was not legally represented at the trial - for “the extreme gravity” of the murder of the petite film producer and mother of one.

Mr Bailey’s lawyer, Frank Buttimer described the French verdict at the time as “a grotesque miscarriage of justice” and Mr Bailey said that he “been bonfired on pyre of lies” in France, alleging the whole trial was “a French farce”.

Mr Bailey has repeatedly denied having any involvement in the murder,

The French authorities forwarded a European Arrest Warrant to the Department of Justice for his extradition to serve the sentence in June and as a first step towards executing that warrant, it must be endorsed by the High Court.

It is understood that Mr Bailey is aware of Monday’s events and will attend with his lawyer, Mr Buttimer and others in his legal team but it is unclear whether he will have a right of audience or submission at this stage.

If the High Court endorses the warrant, it will then be forwarded to the extradition section of An Garda Síochána for execution and Mr Bailey will be arrested on foot of it and brought before the High Court.