Going to a particular location is not a terrorist offence, says Darragh Mackin 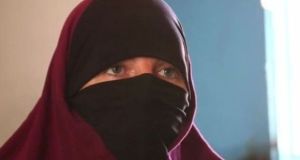 Lisa Smith is being asked by Special Branch counterterrorism detectives about her movements, activities and communications in Europe, Africa and the Middle East since she converted to Islam about a decade ago. Photograph: BBC

Former Defence Forces member Lisa Smith is being questioned for a further 24 hours at a Dublin Garda station as part of the criminal investigation into suspected terrorist offenses abroad.

The woman (38) is being held at Kevin Street station following her arrest on Sunday after her return to Ireland on a Turkish Airlines flight from Istanbul along with her daughter (2).

Her period of detention was extended by a Garda superintendent on Monday morning. Ms Smith, who is originally from Dundalk, Co Louth, can be questioned for up to 72 hours before being released or charged.

The Co Louth woman’s solicitor, Darragh Mackin of Belfast-based Phoenix Law, said that “no evidence of any kind” linking her to a terrorist offence had been put to Ms Smith in questioning. His client had a “strong case” to make in arguing that she was a member of Islamic State but not directly involved in terror organisation Isis.

The Dundalk woman is being asked by Special Branch counterterrorism detectives about her movements, activities and communications in Europe, Africa and the Middle East since she converted to Islam about a decade ago.

The investigation has drawn on information about her movements from foreign intelligence services.

Any prosecution, should one arise, will likely rely on legislation that has so far been untested in prosecuting individuals suspected of terrorist offences overseas.

Gardaí are investigating whether Ms Smith engaged in terrorist recruitment or training, offences which carry a a sentence of up to 10 years.

The most likely charge, if the Director of Public Prosecutions decides to prosecute, is membership of an unlawful organisation, which carries a maximum sentence of seven years.

Mr Mackin sought to distinguish between Ms Smith’s travelling to Syria in 2015 to live in the Islamic State “caliphate” covering parts of Iraq and Syria declared by the terror group, also known as Isis, and any role with the group itself.

“It is not an offence in itself to travel for innocent purposes. Lisa has consistently denied and refuted any allegation that she was involved in terrorist activity or terrorism generally,” he said.

Prosecutors are likely to rely on media interviews Ms Smith gave to RTÉ, CNN and other media outlets as evidence of membership of the organisation.

Mr Mackin claimed Ms Smith was being subject to “trial by media” in being accused of terrorist offences because of media interviews she gave while being held in a camp in the war-torn country.

The solicitor argued that there was a “complex religious and political backdrop” to the meaning of term Islamic State and in particular what is known as the caliphate to some Muslims.

“There is a view that the caliphate or the Islamic State is a euphoric land to which you are obliged to commit yourself to and that if you refuse to take the opportunity to go to the euphoric place, that if you die before then, that you will live a very unhappy afterlife,” he said.

This message was relayed to Ms Smith, he said. He portrayed her as a victim of radicalisation “where we see these very dangerous people deliberately taking steps to try and lure vulnerable Muslim women to certain areas”.

He stressed that he had co-operated with the investigations into her. He pointed out that Ms Smith had publicly denounced Isis, which, he said, was “itself a very dangerous thing to do”.