Speed limits to be cut to 30km/h across Dublin

Traffic committee to be asked to approve increase in parking charges up to €3.50 an hour in the city 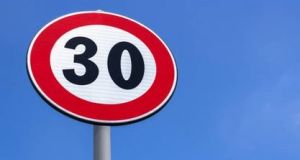 Last year Dublin City Council pushed the 30km/h limit out to 12 more south-side suburbs and 19 on the north side. Photograph: Getty Images

Speed limits will be cut to 30km/h in “all residential areas” across Dublin city under new traffic laws due to come into force next year.

Dublin City Council’s traffic committee will this week be asked to approve the extension of lower speed limits to the whole local authority area to its boundaries with Dún Laoghaire-Rathdown, South Dublin and Fingal.

The council has been working for more than a decade to reduce speed limits on most roads throughout the city and suburbs.

In 2007 it lowered speed limits in the shopping and central business area of the city from 50km/h to 30km/h.

From 2011 the zone was extended as far as Bolton Street on the north side to St Stephen’s Green on the south side, and from Church Street in the west to Gardiner Street and Dawson Street to the east. Parts of the Ballsbridge and Ringsend areas and Marino were also covered by the 30km/h restriction.

Last year it pushed the 30km/h limit out to 12 more south-side suburbs and 19 on the north side.

Following public consultation in August and September, the council’s traffic department has determined the speed limits should apply to all roads and streets, excluding certain arterial routes, as far as its boundary with the three other Dublin local authorities.

More than 900 submissions were made to the council, almost 700 of which supported the extension of the speed limits, while 200 were opposed to it.

The limit is expected to be introduced in three phases next year. In March it will be extended to the northwestern suburbs not already covered by the 30km/h including parts of Glasnevin, Whitehall, Ashtown Finglas, Ballymun and Santry.

In June the limits will apply to south and southwest Dublin suburbs including Ballyfermot, Inchicore, Rathgar, Terenure, Donnybrook and Clonskeagh.

By September the remaining northeast areas of Drumcondra, Donnycarney, Beaumont and Darndale will also be included in the 30km/h zone.

Meanwhile, the traffic committee will also be asked to approve an increase in parking charges of up to €3.50 an hour in the city.

Councillors last month approved a 2020 budget for the city which would include the second rise in on-street parking charges in a year following a decade without increases. This week the traffic committee will be asked to approve the level of these new charges.

Earlier this year the council introduced a 10 per cent rise in on-street parking charges in high-demand areas of the city, the first parking charge increases since 2008.

Lower rates will apply for those using parking tags instead of cash.