Clamping at Luas stations: more readers who’ve been taken for a ride

Pricewatch: Park-and-ride system proves costly but it is user error or faulty machines?

A reader submitted video of a broken ticket machine at Luas station in Dublin - in this case, the number four doesn't work. 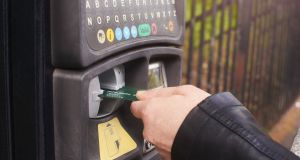 Last week we featured an item from a reader clamped at a Luas park and ride because he appeared to confuse his Xs and his Zeds when paying for parking.

He bought a ticket for his WX-registered car at the park-and-ride ticket machine at Balally Luas station but when he returned, the car had been clamped. He rang the National Controlled Parking Services (NCPS), the people behind the clamps and was told he had not, in fact, paid for parking at all.

But he had a ticket and receipt. The NCPS people did not seem to care and he had to pay €80 to be declamped – a process which took an hour.

When he subsequently made contact with the company, it insisted he had put a “Z” where he should have put “X”. He lodged an appeal and NCPS replied that while it was his mistake, out of the goodness of their hearts, they would refund him €50 – charging him a hefty €30 to process the refund.

His sorry tale prompted others to get it touch with stories which are alarming.

“Your article this week may have touched the tip of an iceberg,” says Edmond Baily, who had, what he said, was a similar experience to our reader.

When he input his car registration number into a machine – starting with the numbers 131D19 – the machine recorded it as 232d29. “When I checked the next day I found the machine was recording a one as a two.”

He says the defective machine remained in service for several days before it was repaired, and asks, “how many other victims there were?”

Then we got a mail from a couple who live close to the Luas station in question.

“Thank you for today’s article on parking mishaps at Balally Luas station,” Malachi O’Neill writes. “As a local, we have noticed that the parking ticket machine on the outbound platform can give some very dodgy results .

“Only last Saturday, as we were purchasing a parking ticket, we were forced to use another machine as the car registration we were trying to enter was not the one the machine was reading. There is a five in our car’s registration number. The parking machine was reading this as a four. This was not the first time this has happened to us. All we, as locals, can say is, ‘watch everything’.”

So that was interesting. But there was more.

But there was still more. And it was more damning.

John Begley read our article and said he had been clamped twice in the Carrickmines park-and-ride Luas site and on each occasion he was clamped for one digit being incorrect on his number-plate entry.

“After the first offence, I take particular care so was very surprised second-time around,” he writes. “So the next time I passed I checked the machine, which revealed faulty numbers.”

Begley had the good sense to use his phone to record what was happening and in the video he sent us it is clear that when he tried to input the number four, the machine he was using recorded it as the number three. It did this on several occasions.

“I checked again later in the day and the issue was resolved, so it is clear that someone is fixing these machines during the day, but no allowance is being made for those caught out in the morning.”

So we got back in touch with NCPS again.

We pointed out that John Begley not been paying attention he would have keyed in the wrong car registration number through no fault of his own and would most likely have been clamped.

Then he would have had to pay as much as €80 to be declamped and at best – if an appeal was successful – he might have got €50 back.

We asked if this fault when inputting reg numbers was a known issue? We asked if NCPS could shed any light on what was happening in the video? We asked if it accepted that it is at least possible that the reader from Wexford who we featured last week and who is adamant he keyed in the right reg number was also using a faulty machine?

And we wondered if, seeing as how there is clear evidence that the machine in the video sent to us was faulty, could users of the service be sure other machines were not similarly affected?

We also wondered if the company could let us know what percentage of those who have been clamped by it were clamped because they had incorrectly input their own car reg number?

We eventually got a terse response.

“NCPS are contracted by the operator for Luas Park and Ride to manage the car park facility. NCPS’s role is to make sure all parkers have paid for parking either by the Ticket Vending Machine or via parkbytext. If they find someone had not paid the vehicle is immobilised. Searching the car registration number is the unique identifier to confirm if the person has paid or not.”

It made no comment on the video we sent it and did not acknowledge the concerns expressed by readers. Only when pressed did a spokesman say NCPS “does not own, manage or operate the ticket vending machines”.

We had also contacted TransDev, the company which runs the Luas and the associated Park and Ride facilities, and after initially blaming user error for all our readers stories it eventually conceded there was an issue.

“Luas have reviewed the customer’s video and we are now doing a full review of the ticket machines across the Luas network,” a spokeswoman said.

She said that if a ticket machine is found to be faulty, it is serviced within hours of the report.

“A customer who does find fault with a machine should not, however, continue to input incorrect digits and proceed to the payment stage. There are many other machines in the Park and Ride sites.”

The spokeswoman said that in most cases where someone makes a mistake when entering their registration number and is clamped, a refund will be granted by NCPS.

“We acknowledge there can be a machine error as there is human error too, and customers should be advised further changes to the system will be made to assist with mitigating both”.