‘Physicality of what they were trying to do overwhelmed many,’ says top training officer 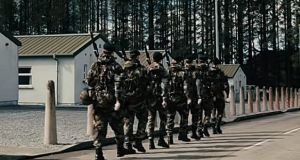 Troops ‘game as you like’, but that 18 hours into the exercise it was apparent they could not keep up. Photograph: Tom Honan/The Irish Times.

Army reservists struggle to conduct exercises with their counterparts in the permanent Defence Forces due to a lack of physical training, according to a senior army officer.

“The sheer physicality of what they were trying to do overwhelmed many of them because it’s very difficult to train reservists on two or four hours a week to actually manage and operate in that sort of environment,” he said.

“Notwithstanding their efforts and their commitment and the determination and so on, they struggled. They struggled when we put body armour on them, when we put battle vests on them when we gave them weapons.”

Brig Gen Dignam said the troops were “game as you like”, but that 18 hours into the exercise it was apparent they could not keep up.

“The limitations on what you can do with a reservist on two or four hours a week really did come home on that exercise, he said. “Has anyone seen [the RTÉ fitness show] Hell Week this week? You’ll get the idea.”

Brig Gen Dignam was addressing a panel discussion on the future of the Army as part of the Slándáil National Security Summit in DCU. The forum was organised to stimulate conversation about the Republic’s national security priorities.

The senior officer said that, in contrast, 11 reservists who work in information technology in the private sector ran the voice and communications system for the exercise “and did it superbly”.

He asked if the future reserve should focus on harnessing the skills of civilian experts such as these to plug knowledge gaps in the permanent force.

What will happen to the reserve?

Jonathan Carroll – a military historian and former officer in the reserves – said attrition levels mean the reserve is “in its death throes”. And he added that it may disappear in two or three years. The reserve is now at about 30 per cent of its nominal strength of 4,069.

Difficulty in getting time off work, poor pay and conditions and the lack of opportunity to serve overseas were cited as barriers to people joining and staying in the reserve.

Comdt Conor King, general secretary of the Representative Association of Commissioned Officers (Raco), agreed the reserve “will die” if these issues are not addressed.

Mr Carroll said some officers are not allowed take the reservists on physical training because unit commanders worry about personnel getting injured. “And then they end up in the High Court and that’s their promotion gone.”

Brig Gen Dignam said he cannot speak for other brigades but that this was not his experience. He said reservists are trained robustly “and if they get injured we take them to hospital. And if they don’t like the treatment they get in hospital and they want to go to court they are welcome to roll the dice.”