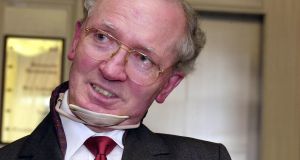 Jim Costello (77) was 15-years-old and on a rare day out from boarding school back in 1958 – enjoying an Irish rugby international against Scotland at Lansdowne Road in Dublin – when his life changed forever.

On these rare but welcome occasions, he and the other students would file into the “schoolboy” section of the stadium, but, this time, Costello diverged from his schoolmates and took up a position to watch the game in the main terrace.

Ten days later, he was admitted to Cherry Orchard Hospital, diagnosed with acute respiratory poliomyelitis, where he remains to this day.

Costello points out that polio spreads in much the same fashion as the coronavirus - through the exchange of bodily fluids such as through sneezing or coughing - and says he understands why the Six Nations rugby match between Ireland and Italy has been cancelled.

“People in the stands, all on top of each other, coughing and sneezing. It is not a good idea.”

In terms of how he contracted polio as a teenager, he says: “None of this is exactly certain because you can’t be certain, but the only indication is that nobody else in the school of nearly 350 boys got polio,” he says.

“I was the only one. That particular match, I did not go into the schoolboy section, which I normally would have. I was in the main terraces. I later learned that there was a small outbreak of polio in Scotland at the time. There is no proof of this, but none of the other boys got polio.”

Costello’s theory is that he probably contracted the disease from someone coughing over him. “My life changed totally,” he says. “I ended up in an iron lung and on a ventilator. I have to use a ventilator now almost all the time to help me to breathe.

“My arms were totally paralysed, my respiratory muscles were paralysed, and my upper body was paralysed.

“My legs were paralysed for some time but I got back walking after a while. But if you’ve no arms and you’re depending on a ventilator, you can imagine the impact that has on your life. I have needed help for everything, and I still do.”

However, throughout his life, Costello says, he has had “the best of people” to look after him, whether in hospital or at home. “I am able to go home for a couple of days some weekends if I’m well enough,” he says.

He founded the Post Polio Support Group, which he chaired for 12 years and was on the board of for 32 years. That organisation still exists and is now called Polio Survivors Ireland.

Costello has lived most of his life in the disability unit at Cherry Orchard, but says the HSE facility has been ordered to close on foot of an inspection by the Health Information and Quality Authority (HIQA).

“The disability unit that I am in presently and have been in since 1958 is to be closed by the HSE and I am to be moved to any bed that can be found on the rest of the Cherry Orchard campus,” he says.

“They are pushing people who are able out into the community and the rest of us are being put into other units but we’re not sure where.”

The HSE has been asked for comment about the status of the unit.