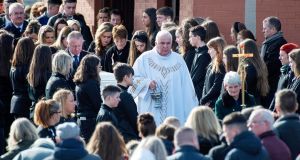 A girl aged 16 killed in a car crash a week ago was recalled with love as a kind and generous person at her packed funeral Mass on Wednesday.

Jennifer Haynes recalled that her youngest daughter, Kimberly O’Connor, was a person who never saw any bad in anyone and touched many people with her generosity and kindness during her short life.

“Kimberly – you will forever be in my heart – I will never understand why you were taken from me. You always had a positive vibe to you and never saw wrong in anyone,” said Ms Haynes.

“I am so proud about how mature and positive you were in your life, you were a leader in everything but in a caring, understanding way – everyone knew how good you were and you have left everyone who knew you heartbroken.”

Ms O’Connor was killed when the car in which she was a front-seat passenger hit a wall less than 50 yards from her home on Harbour View Road in Knocknaheeny on Cork’s northside, just before midnight on February 19th.

The community rallied around her grieving family as hundreds thronged St Mary’s on the Hill in Knocknaheeny for the funeral Mass.

Her older sisters, Shannon and Britney, also gave tribute. Fighting back tears, they struggled to speak of their younger sister, who had lost her father, Mark, when she was just four years old, but overcame that tragedy to achieve much with her music and singing.

“From the time you could walk and talk, you were our drama queen, singing and dancing every day around the house  - everywhere you went, the room lit up with your beautiful smile and your infectious laugh," Shannon recalled,” Shannon recalled.

“There was nothing you wouldn’t do for anyone... Kimberly, your memory will never die, there won’t be a day go by when we won’t say your name and recall you... sleep tight baby doll, I’ll love you forever,” she added.

Britney said: “You were 16 years old with your life ahead of you with so much beauty and talent – you were the kindest girl who never had a bad word to say about anyone, you were always smiling and always made everyone smile.”

Ms O’Connor was a transition year student at Terence MacSwiney Community College in Knocknaheeny. Her performances in school musicals, in which she played the lead role in two productions at Cork Opera House, were also recalled.

So too was her trip to the Hope Foundation in Kolkata, India, with four other pupils from the school and two teachers, during which they assisted the Irish charity with painting orphanages.

She spread joy and happiness wherever she went. She empathised with people and was always a voice for her fellow classmates. She had lots of sass

Local parish priest Fr Greg Howard said he had never seen such a crowd at St Mary’s on the Hill in his seven years in the parish. It was a testament to the respect people had for Ms O’Connor and her family, he said.

Fr Howard said a cloud had come over the community when word spread of the crash which took her life, but people had rallied around her family.

“Lots of things get said at funerals and at wakes. Sometimes, with the best will in the world, our words might not say what we mean at all, but our gestures and our words are all we have.

“Through them we can remind one another that we are not alone, especially in the face of a tragedy like this. We need words which can express our relationship to Kimberly and words for each other which can help us.

“She was charming, a total extrovert. She spread joy and happiness wherever she went. She empathised with people and was always a voice for her fellow classmates. She had lots of sass.”

Fr Howard recalled the words of Terence MacSwiney Community College principal, Phil O’Flynn, when she said “Kimberly was so intelligent, so bright and so able. She was full of fun. She was such a bright light.”

Whether it was helping the Hope Foundation or singing in the school musicals, Ms O’Connor used her talents generously and unselfishly. “This is a life fully lived – talents used for the benefit of others.”

Following the Mass, Ms O’Connor, who is also survived by her infant brother Cody, was buried at St Catherine’s Cemetery in Kilcully.

An 18-year-old boy injured in the fatal crash remains critical in intensive care at Cork University Hospital, while the 16-year-old driver has been discharged from hospital.