The terrible toll of bird collisions with modern buildings 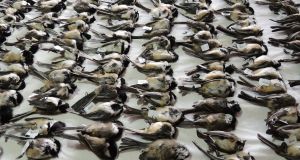 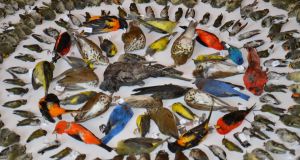 “Without these birds, we are in significant trouble. They control insect populations, distribute seeds, pollinate plants and provide food for other wildlife.” Photograph: FLAP Canada. 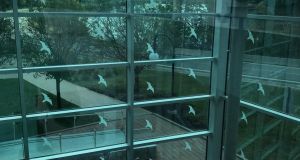 Once problem areas are identified, the primary aim is to make windows visible to birds. One of the most effective ways to do this is with the placement of rows of markers on the exterior surface of the glass. Photograph: FLAP Canada

Be it in homes, offices or shopping malls, many are seeking to get closer to nature without having to set foot outdoors.

As our cities and residential areas grow, so too does public awareness of this issue. The founders and volunteers behind Fatal Light Awareness Program (FLAP) Canada – the world’s first organisation to address the issue of bird collisions with buildings – have played a huge role in this.

“In the 1980s, I was made aware of the issue of bird collisions colliding with Toronto’s towers. I was horrified to learn that this was happening and there was no indication of any concerns or written materials about the issue,” says co-founder and director of FLAP, Michael Mesure. “I went down and found dozens of birds lying on the sidewalk before daybreak. I didn’t quite realise at the time that this is something that attached itself to me and I just could not let go of it.”

Since FLAP’s establishment in 1993, other organisations concerned with bird collision have taken flight, both in North America and beyond. Our understanding of these incidents has also greatly improved, owing to a growing body of research.

“Birds are never able to understand the concept of glass as both a transparent barrier or something that might reflect. They can learn about individual pieces of glass if they are resident in an area and aren’t killed the first time they encounter it. Whereas we learn the concept of glass very young, they don’t seem to have a brain that’s able to do that kind of generalisation,” says Dr Christine Sheppard, director of the Glass Collisions Program at the American Bird Conservancy.

Day-time collisions can occur when birds fly towards a reflection of the sky or foliage in a window. In all-glass structures, they also collide due to lack of awareness of the transparent barrier between them and their destination.

At night, artificial light from buildings can divert nocturnal migrants from their path and draw them into urban centres, where they are at a higher risk of collision. It was the realisation of collisions caused by artificial light that inspired FLAP’s foundation. However, according to Mesure, the group quickly learned that most collisions take place by day.

While collisions are often associated with high-rise structures, a large proportion of incidents actually occur at low-rise buildings and residential homes.

Buildings aren’t the only cause of glass collision. The Czech Society for Ornithology recognised glass bus shelters were problematic and developed a nationwide reporting system to record collisions and, subsequently, modify the most harmful shelters. Transparent noise barriers along urban roads also pose a threat, notes Sheppard.

When it comes to glass collision, migratory species tend to be most vulnerable. This has been observed in studies worldwide, including in Calgary, where the Calgary Migratory Species Response Team (CMSRT) recently conducted its first series of surveys.

“Resident birds might adapt to their surroundings,” explains assistant professor of biology at St Mary’s University and co-founder of CMSRT Dr Scott Lovell. “Migratory birds are fairly naive when they’re flying from breeding grounds to their wintering grounds. Coming across a building is probably something they’ve never done before.”

Surveys have shown that bats are also affected. Five silver-haired bats were found during the recent Calgary survey, four of which were rehabilitated by Calgary Wildlife Rehabilitation Society and released.

“One of the most important things if you’re trying to do something about an existing building is to locate the priority areas,” says Sheppard.

Once problem areas are identified, the primary aim is to make windows visible to birds. One of the most effective ways to do this is with the placement of rows of markers on the exterior surface of the glass. Exterior placement will “disrupt the illusion of a natural environment reflected in the glass”, according to the FLAP guidelines.

“The spacing of the marker is very important. You have to make it tight enough so the bird doesn’t think it can fly through those gaps,” explains Mesure.

Research has shown that most birds will not fly through spaces less than 2in high or 4in wide; this is widely referred to as the “2x4” rule. While this rule will greatly reduce collisions, FLAP Canada and many others have revised this to the “2x2” rule, deeming it more effective a deterrent for smaller species like hummingbirds. Netting, window film and external insect screens are just some of the other retrofitting options.

Since 2010, Sheppard has been involved in research at Powdermill Avian Research Centre to determine what types of glass are particularly problematic for birds. Using a bird tunnel, she and her colleagues can test how much of a deterrent a particular pattern or type of glass are. Through education and outreach to architects and building managers, she also aims to dispel the myth that bird-friendly buildings are displeasing to the eye.

“You can deter collisions quite effectively using patterns that cover less than 7 per cent of the surface,” she says. “We want people to realise this could be part of almost any design. It overlaps substantially with heating and glare control, and with security in some instances.”

Despite most of us having first-hand experience of bird collision, many people find it difficult to grasp the scale of the problem. As birds can be scavenged or – if alive and injured – fly away post-collision, we don’t always see the victims. To illustrate the issue, FLAP holds an annual bird layout event, which involves displaying the dead birds recovered by patrol volunteers to the public.

Much of the work on bird collisions with glass is concentrated in the US North America owing to the existence of major migratory pathways there. While it’s not believed to be an issue of major conservation concern in Ireland, Niall Hatch of BirdWatch Ireland says they would welcome relevant research.

“We would welcome some studies into this and some funding provided to see to what extent this is a problem within Ireland so that at least we have some sort of baseline on which to base further developments,” he says, adding that the organisation receives regular calls from homeowners regarding bird collisions, though usually they concern common species.

Founder of CMSRT Kathleen Johnson notes anyone can set up a similar monitoring and rescue initiative in their locality. “Don’t be afraid to reach out to organisations and see if it’s worth exploring. I think together, we can make a big difference.”

Indeed, unlike many other environmental issues, Mesure says this could be easily resolved. “Without these birds, we are in significant trouble. They control insect populations, distribute seeds, pollinate plants and provide food for other wildlife,” he says, also noting the economic value of the birdwatching industry. “People need to take this seriously on so many levels. And really, it takes very little to mitigate the threats.”

Changes in legislation have played a huge role in the shift of societal perception of issue bird collisions, particularly in Canada. In collaboration with Fatal Light Awareness Program (FLAP) and other organisations, the City of Toronto developed ground-breaking bird-friendly development guidelines in 2007, which later inspired similar guidelines in cities across North America.

These became mandatory under Toronto’s Green Standards in 2010, meaning that all new mid-rise to high-rise buildings have to meet a requirement for bird collision mitigation.

However, it was a landmark court case in 2013 that drew even greater attention to the problem. It held that sunlight reflected from a building is an emission of radiation, which can be considered a contaminant that harms animals under the Ontario Environmental Protection Act. FLAP is working with the government to bring this law to a level where it can be effectively enforced.