Head of key State transport body to step down 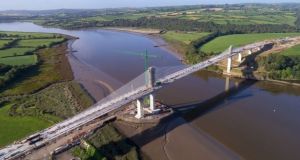 TII is responsible for maintaining more than 5,000km of national roads, including the Rose Kennedy Fitzgerald Bridge over the River Barrow, linking Co Kilkenny and Co Wexford. File photograph: The Irish Times

Michael Nolan, head of the State transport company Transport Infrastructure Ireland (TII), is to step down later this year.

Mr Nolan (60), who comes to the end of his five-year term in 2020, was the first chief executive of TII, overseeing the setting up of the organisation after the merger of the National Roads Authority and the Railway Procurement Authority in 2015.

TII, with an annual budget of about €1 billion, is responsible for maintaining more than 5,000km of national roads, which carry 45 per cent of all road traffic and more than 90 per cent of freight traffic in the Republic.

The organisation is also responsible for Dublin’s Luas tram system, and is working on the State’s largest single public transportation investment, the Dublin MetroLink. It is also progressing many infrastructural projects under the National Development Plan 2018-2017 and Project Ireland 2040.

A competition for a new chief executive is expected to be announced on Friday.

It is understood TII is hoping to have a new chief executive to take over from Mr Nolan by August and that he will remain in situ until a successor is appointed. The appointment is for a five-year term. The organisation’s budget for capital projects and maintenance on national roads and light rail network runs to about €1 billion a year.

Prior to his appointment as chief executive, Mr Nolan was head of major projects with the NRA, during a period when much of the State’s motorway network was developed.

While he started his career in the private sector in the US, most of it has been spent in public service, focused on the delivery of transport infrastructure.

TII chairman Cormac O’Rourke praised Mr Nolan’s leadership and engineering excellence. He said Mr Nolan had overseen the delivery of many successful projects which had transformed Ireland’s transportation infrastructure had was a key factor in Ireland’s economic success.