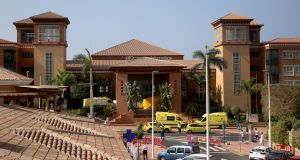 Several ambulances are parked outside a hotel placed in quarantine due to coronavirus in the town of Adeje, on the Canary island of Tenerife, Spain, on Wednesday. At least four guests tested positive for the virus. Photograph: Cristobal Garcia/EPA

Public health authorities are planning for a massive increase in the number of people being tested for coronavirus, Minister for Health Simon Harris has said.

Up to now, 90 people have been tested and all results came back negative, meaning there is no confirmed case of the virus in the Republic.

However, since the decision to expand the number of areas of the world subject to coronavirus-related travel advice, the number of people seeking tests is expected to increase.

About 81,000 people around the globe have now been infected with Covid-19, while a growing list of countries brace for the illness to claim new territory.

Previously, the Department of Foreign Affairs’s travel advice was confined to travellers from China, but it now encompasses other areas, including Japan, Hong Kong, Iran, and four regions in Italy where restrictions have been imposed.

Mr Harris said that by dint of adding “a load of new countries to the list” of affected areas more people with symptoms may need to be tested. A decision by the National Public Health Emergency Team to shift the self-isolation of tested people from hospitals to the community was “an acknowledgement” of the fact that the number of affected countries has increased.

Under the plan drawn up by public health officials, every hospital has a designated isolation facility to treat patients with the virus. But Mr Harris said if Ireland got to the stage where there was a significant number of cases, decisions would have to be made, just as they were during the Sars and foot-and-mouth outbreaks.

Some health services would be “prioritised” by providing isolation facilities in certain hospitals, he suggested.

The Government has been briefed twice on the unfolding emergency, he added, and opposition spokespeople on health, and TDs, have also been briefed.

A HSE information line was providing a good service and would remain open next Sunday to field queries from the public, he said.

Italy has become a front line in the global outbreak with 322 cases. Italians or people who had recently visited Italy have tested positive in Algeria, Austria, Croatia, Romania, Spain and Switzerland.

Germany has said it could no longer trace all cases of the virus, as the number of new infections inside China – the source of the outbreak – was for the first time overtaken by those elsewhere.

German health minister Jens Spahn urged regional authorities, hospitals and employers to review their pandemic planning. “Large numbers of people have had contact with the patients, and that is a big change to the 16 patients we had until now where the chain could be traced back to the origin in China,” he said.

US health authorities, managing 59 cases so far, have said a global pandemic is likely, but President Donald Trump accused two cable TV channels that frequently criticise him of “doing everything possible to make [the coronavirus] look as bad as possible, including panicking markets”.

The US Centers for Disease Control and Prevention had also spoken on Tuesday of a nascent pandemic. “It’s not a question of ‘if’. It’s a question of ‘when’, and how many people will be infected,” said its principal deputy director, Anne Schuchat.

The World Health Organisation (WHO) said China had reported 411 new cases on Tuesday, as against the 427 logged in 37 other countries.

However, WHO chief Tedros Adhanom Ghebreyesus advised diplomats in Geneva on Wednesday against speaking of a pandemic.

“Using the word pandemic carelessly has no tangible benefit, but it does have significant risk in terms of amplifying unnecessary and unjustified fear and stigma, and paralysing systems,” he said. “It may also signal that we can no longer contain the virus, which is not true.”

In Japan, prime minister Shinzo Abe called for sports and cultural events to be scrapped or curtailed for two weeks to stem the virus, as concern mounted over whether the 2020 Tokyo Olympics could proceed.

On Wednesday, the IRFU confirmed the Ireland-Italy Six Nations match scheduled to take place in Dublin on March 7th has been called off. It said it hoped the match could be rescheduled for a later date.

In relation to other mass gatherings, the Minister for Health said guidelines were being drawn up based on advice from the WHO to help guide the organisers of such events.

Minister for Sport Shane Ross warned that the Government will cancel more sporting fixtures if it is necessary as part of a concerted effort to prevent the coronavirus outbreak from reaching Ireland.

Dr Tony Holohan, the Department of Health’s chief medical officer, said the rugby match would have resulted in a number of people travelling from an affected region and there would be a “high risk of cases being imported” from Italy.

Italy has reported more than 300 cases of coronavirus and 11 deaths in the northern part of the country in recent days.

Austria, Croatia and Switzerland also reported their first cases linked to the outbreak in Italy, while Spain and France recorded new ones, also involving people who had been to northern Italy.

In Tenerife, tourists have been told to stay in their rooms at the four-star H10 Costa Adeje Palace in the southwest of the island after an Italian man and his wife tested positive for the virus. There are reports of two more cases there.

France has recorded its second death from the virus, a 60-year-old Frenchman who died in a Paris hospital. The first positive test in South America has also been recorded in a 61-year-old Brazilian man who had recently been to northern Italy.

On Wednesday, North Macedonia reported its first case, while Lebanon confirmed its second case of the virus, saying the patient was quarantined in a Beirut hospital after returning from a religious trip to Iran.

Amid rising public concern over travel to Italy, particularly in relation to school ski groups that have returned recently from the north of the country, Mr Harris emphasised that there is no “blanket requirement” on people who are well and have returned from affected areas to self-isolate.

“Anyone who has been to the affected regions in northern Italy – Lombardy, Veneto, Emilia-Romagna and Piedmont – in the last 14 days and has a cough, shortness of breath, breathing difficulties or fever should self-isolate and phone their GP immediately.

“Anyone who has travelled from the affected regions in northern Italy and has no symptoms should visit hse.ie for advice.”

A number of Irish citizens in Tenerife have contacted the Department of Foreign Affairs after the H10 Costa Adeje Palace was placed under quarantine.

Restrictions are in place at the hotel, with some 1,000 tourists staying at the complex not allowed to leave. The department said it is providing consular assistance. It said the Irish Embassy in Madrid is “closely monitoring the situation” and is in touch with the local health and tourist authorities. Additional reporting: agencies