DUP leader, who was on family trip, says she could not pass personal invite to a colleague 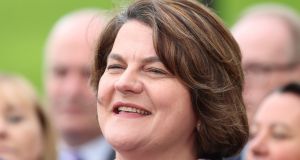 DUP leader Arlene Foster has defended her decision not to meet Pope Francis in Dublin or to send a party representative in her place. Photograph: Liam McBurney/PA Wire.

DUP leader Arlene Foster has defended her decision not to meet Pope Francis in Dublin or to send a party representative in her place.

Ms Foster on Tuesday said she could not accept the invitation to meet the pope at Dublin Castle on Saturday as she was abroad on a family holiday. The pope visited Dublin and Knock, Co Mayo as part of the World Meeting of Families.

“I think it is very ironic actually that while the pope was marking a celebration of the family others can’t understand that I was with my family at the weekend. That’s the reality,” she said at Stormont.

Pressed on why she did not send a party delegate to the event in her place, Ms Foster said this was because the invitation was issued to her “personally”.

“I received an invitation personally to attend, I think it was the function to be held by the Republic of Ireland’s Government,” she said.

Party leaders such as Robert Swann of the Ulster Unionist Party and Naomi Long of Alliance also did not attend but they sent representatives in their place.

“That’s a matter for other parties,” said Ms Foster.

She added: “I think very clearly I acknowledged the significance of the event when I made the statement saying I wouldn’t be going.

“I know it’s a hugely significant event, particularly for Roman Catholics in Northern Ireland and in the Republic of Ireland, and that is something I hope that they enjoyed when the pope was here.”