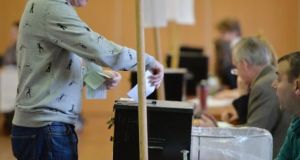 The formal order calling the 2018 presidential election has been signed by Minister for Local Government Eoghan Murphy.

Mr Murphy said polling day is to be held on Friday, October 26th.

The signing of the Presidential Election Order kick-starts a 28-day period in which hopeful candidates can secure a place on the ballot paper to take on President Michael D Higgins in the autumn. The closing date for nominations will be noon on September 26th. The nomination period will begin on August 30th .

Presidential returning officer will be Barry Ryan, a prinicipal officer from his Department.

T he winner of the election will be inaugurated on November 11th, 2018.

“Lots of people are interested. It’s a very important office,” Mr Murphy told Today with Miriam on RTE Radio. He wished all the candidates the best of luck.

Mr Higgins confirmed in late June that he had decided to seek re-election for a second term as president of Ireland. The sitting president can nominate himself to contest in the election.

Fine Gael has said it will actively canvass for the re-election of Mr Higgins and may use party resources to assist his campaign for a second term in Áras an Uachtaráin.

Sinn Féin has said it will also include a candidate in the election.

Those who have expressed an interest in standing as Independent candidates against Mr Higgins have two options to enter the contest: by gathering 20 signatures from TDs and Senators or by winning the backing of four county councils. As the Dáil does not return from its summer recess until September 18th, the focus for most aspiring candidates is on the councils.

Mr Smith spoke of the homelessness crisis and mental health issues and also said he would like to see two articles restored to the Constitution which would allow the removal of ministers for incompetence.

Mr Smith, who said he had played for the thousands of people who supported the Stand4Truth demonstration in solidarity with survivors of sexual abuse during the pope’s visit to Dublin at the weekend, said Ireland was a “changing country”. He said he did not have any views on the pope or on religion but that “all religions should be tolerated”.

Mr Duffy, who is from Co Meath, told councillors that, as president, he would be “among the people, not just talking to them, but more importantly listening to them and helping to channel their ideas and concerns through the platform of the presidency”. He said Ireland was changing dramatically.

He proposed an “international youth corps” for young people in order to capture “missionary zeal”. They would spend three months serving their local community followed by three months overseas in the developing world.

Ms Freeman began her address shortly after 11.30am and is addressing councillors on her passion for supporting mental health issues.

She said she wanted to use “the highest office” in the land to focus attention, to generate dialogue, to highlight issues, and to “surely, doggedly and persistently” make the changes in this country we so needed.

Kildare County Council was also set to hold a session on Monday to hear from potential candidates.

The Fine Gael chairman of Westmeath County Council told RTÉ’s Morning Ireland that the council would most likely back Mr Duffy as its nomination for the presidential election.