Pope’s sincere words of grief were moving, but not enough

Analysis: He should instruct that relevant abuse documents be handed to authorities 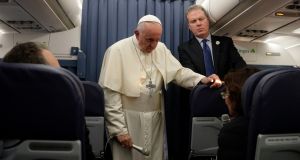 Pope Francis, flanked by Vatican spokesperson Greg Burke, listens to a journalist’s question during a press conference aboard of the flight to Rome at the end of his two-day visit to Ireland. Photograph: Gregorio Borgia/AP Photo/Pool

On May 18th, 1998, 20 years ago, there was a special service at St Andrew’s Church on Dublin’s Westland Row for those who had suffered abuse by priests as children.

Then Archbishop of Dublin Desmond Connell led the service. St Andrew’s was full. Included were many members of religious congregations. Archbishop Connell spoke of “the pain of those who often cried in vain for help and of those who could not even name their anguish”. Members of the congregation lit candles from a large “candle of healing” on the altar and were blessed with the Sign of the Cross “as a gesture of healing”.

Later that evening, talking to this reporter, Christine Buckley – who had been the focus of a documentary on abuse of children at Dublin’s Goldenbridge orphanage – recalled how two nuns at the St Andrew’s ceremony, no doubt until then awash with compassion, on seeing her arrive uttered “would you look at that brazen hussey”.

Thanks to the Murphy report we now know that at the time Archbishop (later Cardinal) Connell had only given gardaí details of allegations of child sex abuse a short time before, and then only those concerning 17 of the 28 priests whom the archdiocese knew faced such complaints.

So much for fine words, their repetition, and symbolic gestures when it comes to addressing harsh realities. Listening to Pope Francis’s repeated and clearly sincere words of passionate grief at the abuses for which his church has been responsible in Ireland, as elsewhere, this weekend was deeply moving. But it is not enough.

One of the striking things about his weekend visit, and the many thousands of people who attended events at which he was present, has been the consistency with which the Catholic faithful themselves said he must act, not just talk, where the abuse issue is concerned.

It began with President Higgins who told Pope Francis on Saturday “all would benefit from a set of actions that gave the necessary assurances to all citizens past, present and future, of all faiths and none”.

This was echoed in the fine speech by Taoiseach Leo Varadkar a short time later at Dublin Castle. He told Pope Francis there “can only be zero tolerance for those who abuse innocent children or who facilitate the abuse”. He continued: “We must now ensure that from words flow actions.”

Again and again these sentiments were repeated by people at Knock and in the Phoenix Park last Sunday. The Irish appear unanimous in this.

During his in-flight press conference on the plane returning to Rome last Sunday night, Pope Francis suggested Marie Collins – a former member of the Vatican’s Commission for the Protection of Minors – was fixated on the idea of a tribunal being set up at the Vatican to hold errant bishops to account.

Marie Collins speaks for the vast majority of Irish Catholics in this matter and she has far more experience of dealing with the issue than Pope Francis has, and alongside Church authorities too. She knows what she is talking about. Bishops and religious leaders who cover up the abuse of children should know they face removal if they dare place the welfare of the church, themselves or their priests before that of a child.

That is how you really change a culture. Not through fine words, gestures and symbols.

Pope Francis argued that such a tribunal may not be nuanced enough to deal with the variety of complex international cultures. No one doubts his sincerity or personal commitment to dealing harshly with the “caca”, those who cover up abuse, but what happens when his papacy comes to an end? Such an important matter should not be left to anybody’s discretion. It must be placed beyond trust and the personal and be institutionalised in a structure, a tribunal.

It was a glaring, unsatisfactory omission from what, despite the weather, was a weekend where the people of Ireland enjoyed the company of this exceptional man in such repentant form. But it is not he who should be repenting.

But he has such a role now. He should instruct that all relevant abuse documentation be handed over to relevant authorities, on request, anywhere such legitimate inquiries are taking place. And he should set up a tribunal to hold bishops to account.

And also, not to be too negative about things, he should have visited Northern Ireland. It would have been positive for relations on the island overall, as well as a heartening experience for not just Catholics there, but all people of goodwill which is the great majority. It is probable too that then DUP leader Arlene Foster would also attend.

Overall, it was a successful visit despite the weather on Sunday. Pope Francis won over very many people. And the smooth running of the entire almost week-long World Meeting of Families events, as well as the visit, was a tribute to Dublin’s Catholic Archdiocese, the WMoF organising team, An Garda, the Office of Public Works, and the Department of Foreign Affairs.