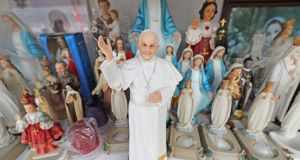 The visit of Pope Francis to Ireland this weekend was “a once-in-a-generation chance” for the Vatican to accept its role in the cover-up of clerical child sex abuse and the pain it caused by denial and rejection of those who suffered, Minister for Health Simon Harris has said.

It was also “vital”, he said, that the pope “outlines the clear actions and measures he intends to take to ensure the same injustices don’t reoccur and to bring about justice and accountability”.

The Minister said: “This papal visit, the second only in our history, takes place in a vastly different context to the last one.

“Many people are finding it difficult with the feelings of hurt and pain it is bringing up. In recognising that and also for the many faithful who will feel positively about this visit, this is a once-in-a-generation chance for the Vatican to not only acknowledge the abuse some of its members and its institution inflicted on the most vulnerable but to accept the Vatican’s role in the wilful cover-up of such abuse and the additional pain caused by denial and rejection of those who suffered.

“Thousands of people across this country are still living with the realities of clerical abuse. We owe it to them; our fellow citizens, our neighbours, our friends, our family members, to stand with them and stand up for them,” he said.

“It is vital that Pope Francis hears their anguish and apologises but, much more importantly, outlines the clear actions and measures he intends to take to ensure the same injustices don’t reoccur and to bring about justice and accountability.”

It was, he said “really important that the pope meet with victims of abuse on his visit and hear first hand what they endured and to offer them that commitment in terms of clear actions”.

The Vatican confirmed yesterday that Francis would meet victims of abuse during his trip to Ireland on Saturday and Sunday next. In a video message released on Tuesday night ahead of his arrival in Dublin on Saturday, the pope said he was “excited at the thought of returning to Ireland”.

As Fr Jorge Bergoglio, he stayed at the Jesuit Institute in Dublin’s Milltown between January and March 1980 while studying English.

He added that: “Although the specific reason for my visit to Ireland is the World Meeting of Families, I would like to include all the members of the Irish family. In a particular way, I pray that it may further the growth of unity and reconciliation among all Christ’s followers, as a sign of that lasting peace which is God’s dream for our whole human family.”

On Tuesday night, all of Ireland’s 26 Catholic dioceses simultaneously opened the 9th World Meeting of Families (WMoF) with a special liturgical ceremony and the ringing of bells in each of the 26 Catholic diocesan cathedrals.

At the opening prayer in the RDS last night, WMoF president Archbishop Diarmuid Martin said, “there are those who would look at the world meeting as some sort of ideological gathering to celebrate a type of family which probably does not exist”.

The family, he said, “is not a remote ideological notion but the place where compassion, kindness, gentleness, patience and forgiveness are learned, practised and spread”.

He noted how, over his lifetime, “family life has changed” and that “we have to find ways of ensuring that these new relationships and challenges in family culture become ‘clothed in love’.”