Rite&Reason: Parishes are shifting as communal force and should be bedrock of lay-led identity 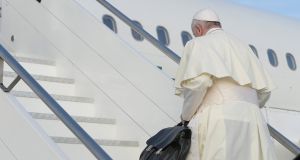 Pope Francis: It will require courage and creativity to ensure there is a legacy to last week’s events and they are not a one-off fireworks display. Photograph: Vatican Media

We certainly live in interesting times.

On May 26th, we learned that two-thirds of the country voted Yes to repeal the Eighth Amendment and, just one month later, within 48 hours of general release, 400,000 tickets were booked for the World Meeting of Families closing Mass in the Phoenix Park, with the remaining 100,000 available tickets booked out soon after.

Commentators interpreted the referendum vote as signalling the final nail in the Irish Catholic Church’s coffin while others have presented the demand for tickets to the papal Mass as a clear demonstration of a continuing loyalty to the church, even if the number who braved the inclement weather and turned up on the day was lower than predicted.

Of course the truth is far more nuanced, complex and interesting. It demands a much deeper analysis than simple polemics.

However we are to understand it, the level of interest in the World Meeting of Families and in particular the visit of Pope Francis provides the Irish Catholic Church with a real challenge and opportunity.

There will inevitably be some “bounce” and renewed interest in faith matters. It will require courage and creativity to seize this moment and ensure that there is a legacy to last week’s events and that they are not simply a one-off fireworks display that quickly peters out.

There are those who suggest that Pope John Paul’s visit to Ireland nearly 40 years ago marked the zenith of the “Cullenisation” of the Irish church (as built in the later 19th century by Cardinal Paul Cullen) with Pope Francis’s visit marking the nadir. Be that as it may, the visit last week came not so much during an era of change as a change of era for the Catholic Church in Ireland.

Pope Francis invites us to step into that change and any legacy of his visit will have to be most impactful at local level – on the ground – if it is to be in any way real. Thus, it will need to take root in our parishes.

Encouragingly, in his exhortation Evangelii Gaudium, Pope Francis says that “the parish is not an outdated institution”.

But he also warns against it becoming “a useless structure out of touch with people” and says the relevance of the parish depends on its flexibility, adaptivity, openness and ability for self-renewal. Traditionally, the parish in Ireland was synonymous with one’s sense of place, identity and belonging.

The understanding was that the parish was the presence of the church within a given territory and a small part of a much larger reality whereby it was identical with one’s homeplace, community, local school, sports club, etc.

This occurred within a cultural context whereby being Irish and being Catholic were somehow conflated.

If parish was previously something about geography, it will in the future need to be far more about community

The parish now exists within an entirely different reality. Fewer and fewer people self-identify as Catholic and, within any given geographical territory, there will be a variety of people represented, belonging to different faiths and none.

Particularly in urban areas, fewer people identify with a territorial understanding of parish and many people shop around for their place of worship, becoming “non-resident” parishioners of the church of their choice.

If parish was previously something about geography, it will in the future need to be far more about community. Pope John Paul II once said the parish is “not principally a structure, a territory, or a building, but rather the family of God . . . and welcoming home”.

Pope Francis has reminded us that a healthy parish is “a community of communities”. Inevitably Irish parishes which tended to be clergy-dependent will need to be lay-led.

We are certainly living in interesting times and Pope Francis stepped on the shores of a very different Ireland from that which John Paul visited in 1979.

Fr Éamonn Fitzgibbon is director of the Irish Institute for Pastoral Studies at the Mary Immaculate College campus in Thurles which is hosting a two-day conference on The Future of the Irish Parish on Tuesday, August 28th and Wednesday, August 29th. Speakers include New Zealand’s Cardinal John Dew, Canada’s Dr Margaret Lavin and South Africa’s Bishop Michael Wüstenberg

1 Woman stranded in Ireland due to pandemic has ‘miracle baby’
2 Don McLean: ‘My ex-wife is the worst person I ever knew’
3 ‘Difficult months ahead’: Europe prepares for more pain as Covid cases soar
4 Almost 20% of staff at Dublin hospital have antibody evidence of Covid-19 infection
5 Two hundred Irish retailers for all your online Christmas shopping
Real news has value SUBSCRIBE