Air ambulance to tackle emergencies in Munster and south Leinster

Community-based, charity-led service operating out of Rathcoole will need €2m a year 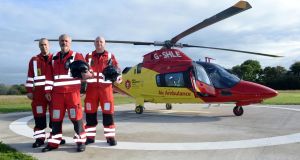 A new charity air ambulance which will provide emergency medical services for up to two million people in Munster and south Leinster has been officially launched.

“This project involves the Irish Community Rapid Response and the HSE’s National Ambulance Service coming together to save lives and serve the public good,” said Mr Coveney as he officially launched the new service which will operate from Rathcoole Flying Strip near Millstreet in north Cork.

The service is the brainchild of John Kearney, who said the service would serve an area south of a line from Dublin to Galway.

“It’s been a long journey since we originally started the rapid response unit in west Cork and we got the idea two years ago or so for an air ambulance based on a similar community-funded air ambulance service in Wales, ” he said

“Rathcoole is an ideal base – it gets us to Galway in 30 minutes, Dingle in 20 minutes, Wexford in 38 minutes and we got to west Cork last week in just 14 minutes. So it really has opened up the provision of emergency medical services,” he said.

“However this is a community-based, charity-led service and it will need to raise €2 million annually from the public to remain operational and we will shortly be launching a major fundraising drive.”

The service, which will be provided by a team of two pilots, five advance paramedics and four emergency medical technicians working a rota, uses an AgustaWestland AW109 Power operated by Sloane Helicopters.

The helicopter can reach a top speed of 300km/h hour and has a range of about 850km. It can carry two paramedics, one stretcher casualty and one walking wounded casualty.

Mr Kearney explained that the service, which will operate only during daylight hours and will only be involved in land-based operations even though it will service the islands, is expected to fly about 500 missions a year.

“The Helicopter Emergency Medical Services went live on July 30th and for the first month up to August 30th, we responded to 56 emergencies and on our busiest day to date, the service was tasked to five separate emergencies,” Mr Kearney said.

Martin Dunne of the National Ambulance Service said they were delighted to be involved in the service as it met all their criteria, including that it is patient-centred as well as safe and sustainable.