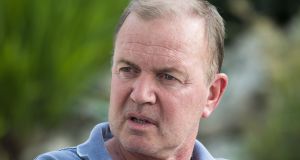 The funeral of Fr Tony Coote will take place in Mount Merrion, Dublin on Monday.Photograph: The Irish Times

Fr Tony Coote approached his diagnosis of motor neurone disease (MND) with determination and without self-pity, the Archbishop of Dublin Dr Diarmuid Martin said on Sunday.

Fr Coote, the administrator of the Church of St Thérèse in Mount Merrion and St Laurence O’Toole’s church in Kilmacud, died at the age of 55 last Wednesday from the incurable neurological condition.

He was diagnosed with the disease in February 2018.

In May he published a bestselling memoir Live While You Can and raised €700,000 to fund research into MND.

In July 2018, five months after diagnosis and in a wheelchair, he took part in a fundraising walk from Letterkenny in Donegal to Ballydehob in Cork, a distance of over 550 kilometres.

It was broadcast as the documentary Walk While You Can on RTÉ One television last December.

Fr Coote is survived by his mother Patricia, and brothers David, Kieran and Pat.

Speaking at the reception of the remains of Fr Coote at the church in Kilmacud, Archbishop Martin recalled the priest’s words at the launch of the book in the same church.

Fr Coote said at that launch: “When one day the train arrives in that station, I will get out onto the platform with hope and no fear”.

Archbishop Martin said Fr Coote’s words were by someone who knew his days were numbered: “For Tony that did not matter. He lived every day and inspired every day until the end.”

Archbishop Martin recalled the dreadful diagnosis that Fr Coote was given following a fall at his home. He had so many ideas about his vision for a “community of believers” which would help each other out in times of need.

“He realised that message of Jesus can free us to be the free men and women that God wishes each of us to be, free not to be entrapped in selfishness and narcissism, but free to bring that love of Jesus to all and to lead them step by step to the fullness of freedom.

“ He began a new stage in his life. Rather than making us feel sorry for him, Tony made us feel humbled in the face of what he could do.

“All of us who knew Tony stand here in sorrow. To remember Tony truly we must go away changing ourselves and recognising how each of us depends on the hand of God who is there challenging us in surprising ways to focus on how the humanising power of Jesus Christ can change our own ideas of power and powerlessness, can change hearts and humanise our harsh society.”

Archbishop Martin described the “enormity of the priestly ministry” that Fr Coote entered into firstly in Ballymun, then in UCD and finally in the Mount Merrion-Kilmacud area.

“ For Tony it was not a question of enormity, but of a myriad of individual simple gestures of kindness and support, of love and respect for young and old, for the conventional and the unconventional, for the orthodox and the unorthodox.

Fr Coote’s funeral takes place on Monday at 11.30am in the Church of St Thérèse, Mount Merrion, followed by private burial.