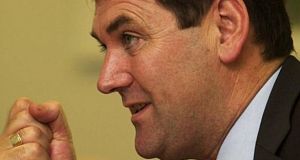 Chairman of Self Help Africa Tom Kitt: “this merger is a practical example of how we can continue to work successfully together to achieve more”. File photograph: Frank Miller/The Irish Times

Two international development charities with headquarters in Northern Ireland and the Republic have merged to improve their support for more than four million people living in sub-Saharan Africa.

At a function in Belfast on Tuesday evening War on Want Northern Ireland formally relaunched as Self Help Africa following a merger with the Dublin-based development charity. Self Help Africa also has offices in London, Shrewsbury, and New York.

When combined the new organisation has 23 charity shops on the island. With 254 workers in Africa it will have a total budget of close to £25 million in 2018 and will provide agricultural, nutrition and income development support to over four million people.

The merger was launched at Belfast City Hall attended by among other SDLP Assembly member Claire Hanna, chairwoman of the All Party Group on International Development, and former Irish government minister Tom Kitt, who is chairman of Self Help Africa.

War on Want NI supports agricultural development projects in Uganda and previously in Malawi, while Self Help Africa has projects in each of these countries, as well as farm and enterprise development activities in Kenya, Zambia, Ethiopia and across several countries in West Africa.

Self Help Africa merged with Gorta, one of the Republic’s longest established overseas agricultural development organisations, in 2014.

Siobhán Hanley, director of War on Want NI said that the merger would provide renewed impetus and new opportunities for the organisation to reach more people, and make a more significant contribution to the work against hunger and poverty in one of the world’s poorest regions.

“Both organisations share the same self-help approach that provides marginalised farming communities with the resources they need to work their way out of poverty,” she said.

Mr Kitt who was involved in negotiations at the time of the Belfast Agreement 20 years ago said “this merger is a practical example of how we can continue to work successfully together to achieve more”.

1 Storm Dennis: Thousands without power as wind warning issued
2 Caroline Flack death: Public disquiet over media conduct grows
3 Storm Dennis washes abandoned ‘ghost ship’ onto rocks off Co Cork
4 Life as a female TD: ‘If I had a euro for every time I’ve been called the C word’
5 EU and UK will ‘rip each other apart’ in Brexit talks
Real news has value SUBSCRIBE