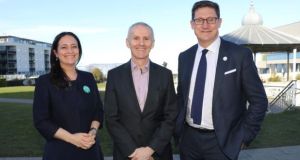 Green Party deputy leader Catherine Martin, former minister and now European election candidate Councillor Ciaran Cuffe and party leader Eamon Ryan pictured in Dun Laoghaire, Co Dublin. The electorate tends to approach European elections with a different mind-set and have given a fair wind to the Greens in the past. Photograph: Green Party/Twitter

The slogan for this year’s Green Party convention is ‘A Sustainable Economy for the Whole Community’. You could go back 20 years, or even 40 years to the beginning of the party in Ireland, and the slogan would be exactly the same.

Indeed, when you look at the party’s core messages on the ‘green agenda’ they are, if nothing consistent. They have stayed immutable for decades in a changing world and a changing Irish society, where the party’s own electoral fortunes have at times seemed unsustainable.

Take another example, the notion of a basic living wage. This reporter remembers hearing the idea forming part of then leader Trevor Sargent’s speech around 2004 and thinking it sounded vaguely nuts, and naively utopian. Fifteen years later, later, with the world of work changing dramatically every year, it is now a live and mainstream talking point. It’s still a core issue for many Greens. The only difference is that everybody else is now talking about it.

The number of members who were present for party leader Eamon Ryan’s speech was a little north of 200. It reminds us the Greens are still a small party with a limited cache in the Irish political landscape. However, what is noticeable is like, unlike other parties, the party attracts much larger number of young members attracted by its ideology and world-view - it is for that reason that it has recovered so much from the total implosion that was the 2011 general election.

The party’s core messages have remained the same but it has tried to be a little more ‘rounded’ on non-core issues, with a little more use of the ‘elbow’ in terms of approach to public discourse. This has partly been achieved by party deputy leader Catherine Martin and its sole Senator Grace O’Sullivan campaigning on new issues in the Oireachtas, including extended maternity leave for mothers of premature babies and the establishment of the women’s caucus, as well as Ms O’Sullivan’s Bill proposing to ban microbeads.

That change, of course, is relative. The prose in leader Eamon Ryan’s leader’s address last night was much more robust than in recent years but while he used some very strong language to describe the record of Taoiseach Leo Varadkar and his Cabinet colleagues, the tone of delivery was not exactly Richard Boyd-Barrett. Still, it signalled the party is elbowing its way in a bit more to establish its space.

The party did not have any formal debate on the Eighth Amendment as its policy on this issue is settled: it supports repeal. Like other parties, there are divided views on the issue but it is clear the majority of its membership, especially the younger members, will be actively campaigning for change.

So, what of its prospects? If you look back to 2011 the prospects looked dismal. It had lost all but three of its councillors and had lost all its TDs and Senators. That meant the party was stoney broke. Now it has two TDs, one Senator and 12 councillors with ambitions to increase its numbers.

If the party is to make seat gains, it needs to extend its appeal to voters for whom climate change is an important, but not clinching issue. In her speech last night, Martin told delegates that the party would need to become a campaigning and listening party if it is to grow. That means embracing other issues that would not be seen as natural to the party, but without losing its connections with its core principles.

Still, that will be difficult. If the party is to gain in the next general election, it will have to hope it can gain the last seat by a whisker, and on the back of strong transfers. O’Sullivan certainly has a chance in Waterford, and the party has an outside chance of gains in a small number of Dublin constituencies, and perhaps in commuter counties such as Louth, Wicklow and Kildare.

Paradoxically, its greatest chance of a gain might be in the biggest constituencies, those of the European elections. There is evidence that the electorate approach those elections with a different mind-set and have given a fair wind to the Greens in the past.

The party’s latest European candidate Ciarán Cuffe has a biddable chance of winning a seat, based on his strong record and reputation on sustainable transport and planning.

All that said, the party is unlikely to be anything other than a small one after the next election.

1 Why Sinn Féin will not call the State by its name
2 McDonald rejects idea SF public meetings ‘an affront to democracy’
3 Investigation into Dublin housing charity launched
4 Irish health officials to ramp up precautions against coronavirus
5 Garda warning after €500,000 of ‘movie money’ found in circulation
Real news has value SUBSCRIBE