Two men convicted of murdering woman after rape and torture 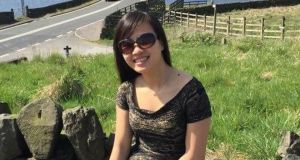 A Northern Ireland man out on parole from a life sentence has been convicted with a friend he met in prison of luring a young mother into a “trap” where she was raped and tortured before being burned alive.

William McFall (51) and Stephen Unwin (40) held Quyen Ngoc Nguyen (28) “captive” at a house during a violent, four-hour ordeal before the former cellmates shared a curry together when their victim lay dying.

McFall and Unwin, who were working as handymen, then “disposed of” her body by fire at a dirt track.

Unwin, of St Oswald’s Terrace, Houghton, raped her and she was forced to hand over her PINs so they could raid £1,000 from her bank.

Her badly burned remains, which could only be identified through dental records, were found face down on the back seat of her Audi A4, which was set alight while she was still “just” alive, the court heard.

McFall, with an address at Waterloo Road, Blackpool but originally from Northern Ireland, was cleared of the rape charge but found guilty of murder following the trial at Newcastle Crown Court.

It was the second time each had murdered, having both killed pensioners in the 1990s before they met in prison. Each served 13 years of a life sentence before they were released on licence.

Mr Justice Morris said mandatory life sentences would follow and he warned them they may be never be released.

He will set their minimum term at a hearing next month.

The mother-of-two worked at her sister’s nail bar but also helped Vietnamese people find accommodation when she came across Unwin, who worked for landlords maintaining properties.

She would not have known he was a life prisoner, out on licence for murdering a pensioner in 1998.

Tellingly, he also set fire to his elderly victim’s house in a bid to cover his tracks.

McFall also murdered a pensioner during a 1996 break-in.

The killers met in the prison system at HMP Swaleside, a Category B institution, in Kent. They got in touch via Facebook after they were both released on licence.

They teamed up, working together legitimately, but also stealing cannabis from farms they found in local properties.

They planned their attack on the 5ft victim and Unwin tricked her into coming into his home, where McFall was waiting.

McFall had texted Unwin earlier that evening saying: “We raping the chink”?

Each of the defendants blamed the other, seemingly hoping to confuse the jury.

McFall wrote to Unwin while they were on remand saying he had been to the prison library and found a “legal loophole” despite what he admitted was damning evidence.

The prosecution claimed their loophole was simply to blame one another.

After the trial, the victim’s sister Quyhn Ngoc Nguyen branded the killers “evil” and said they should never be released.

In a statement, she said: “I believe that if these two people were released at some point in the future, then definitely some innocent people could be harmed.

“I think they should never be released, they are evil.”

David Hines, founder of the National Victims’ Association, said: “A life sentence should mean a minimum of 40 years behind bars.”

McFall made a series of outbursts from the dock while Unwin kept his head bowed after the jury convicted him following four hours of their deliberations.