UK minister pledges to preserve Belfast Agreement ‘at all costs’ 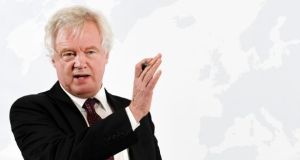 Britain’s top Brexit official, David Davis, said: “Option A is that we get a free-trade agreement, we get a customs agreement, all of those make the Northern Ireland issue much, much easier to solve.”

The UK’s Brexit secretary David Davis has insisted a solution will be found to the Irish border issue after Brexit and a trade deal with Brussels is now “incredibly probable”.

The Brexit Secretary said a trade deal — “the most comprehensive one ever” — would make the border problem much easier to solve.

Mr Davis said the Government was committed to protecting the Belfast Agreement “at all costs”.

“Option A is that we get a free-trade agreement, we get a customs agreement, all of those make the Northern Ireland issue much, much easier to solve.”

The EU withdrawal deal includes a fallback option of Northern Ireland effectively continuing to remain in the customs union, but Mr Davis said either the UK-EU trade deal or new technology could prevent that.

When challenged that there were no other borders of that kind in the world, Mr Davis told the Andrew Marr Show: “We have got a whole load of new technology now.”

Pressed on the British Labour Party’s planned amendment to Brexit legislation — which would enshrine the commitment to no hard border in law — Mr Davis said he would have to see what they came up with.

But he added: “We will not allow a return to the borders of the past, we will preserve — at all costs — the Belfast Agreement.”

Although Mr Davis said the progress meant it was now “incredibly probable, very, very highly probable” that there would be a final deal, “you can never stop making arrangements” for a potential no-deal scenario.

He told the show it was like insurance: “You don’t expect your house to burn down, it’s less than a one in 100,000 chance, but you have house insurance anyway.”

A Sunday Times report suggested Mr Davis has privately threatened to resign if Britain’s fishermen are not handed control of their waters again from 2021.

He defended the deal struck with Brussels during his Andrew Marr Show appearance — during which he was battling illness.

He said: “We will negotiate with our surrounding states so that we have access to their waters and theirs to ours, and markets and so on, but it will be under our control.

“It will not any longer be under the qualified majority voting arrangements we currently have.”

Mr Davis denied that the UK was ultimately heading towards a Norway-style relationship with the EU.

“This will not really look like any other deal as it stands at the moment, it will be a free-trade deal, a comprehensive one, the most comprehensive one ever - even the European Union is now using words similar to that.

Meanwhile, prominent Tory Eurosceptic Jacob Rees-Mogg will warn that failure to stand up to Brussels in the talks could leave the UK humiliated on a scale not seen since the Suez crisis.

In a speech on Thursday marking a year until Brexit, the European Research Group chairman will say: “It would be an admission of abject failure, a view of our politicians, of our leaders, of our establishment that we were not fit, that we were too craven, that we were too weak to be able to govern ourselves and that therefore we had to go crawling back to the mighty bastion of power that is Brussels.”

He will add: “As with the disaster of Suez it would end up being a national humiliation based on lies.” - PA