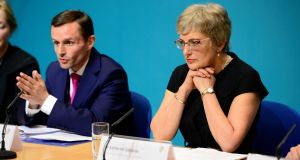 Successive ministers for children since 2002 have not acted on adoptive parents being passed off as natural parents, a group campaigning for adoptive children has said.

The Adoption Rights Alliance has also said it informed the Adoption Authority of Ireland and its predecessor about the practice but it had not acted with sufficient urgency until now.

Earlier this week, Minister for Children Katherine Zappone disclosed there was conclusive evidence of at least 126 cases since 1952 at St Patrick’s Guild where the adoption process was bypassed and adoptive parents were allowed register the child as their natural child with the General Registry Office.

St Patrick’s Guild was one of nine large agencies that dealt with adoptions in Ireland. There is also evidence that such practices were also carried out in smaller nursing homes in the State. The child and family agency, Tusla, is now to conduct a comprehensive audit of all files to try to ascertain the total number of children affected by this illegal practice.

Susan Lohan of the Adoption Rights Alliance told The Irish Times on Thursday that it had raised this situation with every minister for children since the office was founded in 2002.

Initially, the alliance raised the case of Tressa Reeves, an English woman who came to Ireland aged 20 in 1961 to have her child delivered in secrecy. When, many years later, she set out to inquire about the whereabouts of the child, St Patrick’s Guild told her that no record existed. In the late 1990s, Ms Reeves was told by the guild that her son was handed to a couple in the midlands without an adoption order. She was also told that the family had received another child in a similar manner.

Ms Lohan raised Ms Reeves’s case, she said on Thursday, with ministers Mary Hanafin, Brian Lenihan and Barry Andrews, all Fianna Fáil, but none had committed to explore the system. Later evidence of more cases came to light and initial audits conducted by the Adoption Authority of Ireland indicated that the practice was not confined to isolated cases.

The alliance had also raised the issue with Fine Gael ministers for children Frances Fitzgerald, James Reilly and Charlie Flanagan without any progress.

“We have just felt like [all ministers] went through the motions on this issue,” said Ms Lohan. “We went to meetings but very little was done on foot of them.”

The authorities were also aware of the practice. “The knowledge of this goes back decades and it would have been well known that this practice existed in Ireland at the time it was happening,” said a highly placed official with in-depth knowledge of this area.