Savita mural on its way to ‘permanent’ location

Bernard Shaw pub: ‘We will be moving the Aches mural of Savita to somewhere safe’ 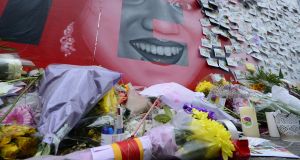 The Savita Halappanavar mural in Portobello, south Dublin, has been removed and is due to be transferred somewhere more permanent.

The mural on South Richmond Street by graffiti artist Aches became a focal point for Yes supporters during the referendum. They left messages and flowers in remembrance of Halappanavar, who died following a septic miscarriage in October 2012 at Galway University Hospital. She had requested a termination on several occasions but was refused due to the presence of a foetal heartbeat.

In a statement on Wednesday, the Bernard Shaw pub said: “Just to let everyone know, we will be moving the Aches mural of Savita to somewhere a little more safe, permanent, but still in view of the public tomorrow morning.

“We’ve been in touch with Together for Yes about preserving all the notes you have left. Thank you to everyone who left flowers, wrote notes, lit candles and left messages. You have left a beautiful tribute.”

Dublin City Council said it has taken photographs and video footage of the mural and the messages left alongside it for its archives.

Halappanavar’s death, described as a “catalyst” in the long-running campaign to liberalise Ireland’s abortion laws, gave rise to several campaigns to repeal the Eighth Amendment to the Constitution in recent years. Her parents said they were “really happy” that Irish people had voted Yes in the referendum.

Her father, Andanappa Yalagi, asked that the legislation to give effect to the referendum result be named “Savita’s law”.

“It should be named for her,” he said.