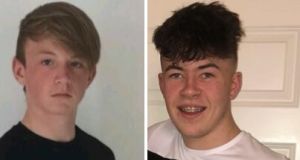 Jack Kenneally and Shay Moloney died after getting into difficulty while swimming in Co Clare. Photograph: Facebook

Two teenage friends have died after they got into difficulty while swimming in a lake in a quarry in Co Clare on Thursday.

The two boys were named locally as Jack Kenneally and Shay Moloney.

It is understood the two 15-year-olds were among a group of teenagers who had been swimming in the abandoned quarry near Knockanean a short distance from Ennis.

It is believed that one of the boys got into difficulty while swimming from one bank to another and his friend swam out to help him but also got into trouble. A third teenager is believed to have tried to help them but had to return to the shore.

Onlookers raised the alarm at around 3.30pm after both boys disappeared below the surface and didn’t reappear. A major rescue operation was was quickly launched.

Two units of the fire brigade from Ennis, including members of their swift water rescue unit, responded to the incident along with ambulance paramedics and a number of Garda units.

The Shannon-based Irish Coast Guard helicopter, Rescue 115, was quickly scrambled along with the Kilkee unit of the Coast Guard. Clare Civil Defence also responded to the scene.

Our brothers in arms. Our warriors when the going got tough. Our leaders when the pressure came on. Our pride when they took the field. Our joy when they lit it up off the field. Our devilment when it all got too serious. Our gentlemen always. Our terrible loss. pic.twitter.com/W1Qp9PZrIa

Fire crews quickly located the first casualty lying on rocks below the surface. The second teenager was found just a few metres away.

The bodies were recovered with the assistance of a local man who brought diving equipment to the scene. Fire personnel assisted the diver and helped ambulance paramedics with efforts to resuscitate them.

Senior gardaí, fire service and Civil Defence officers attended the scene while gardaí­ travelled to the homes of the young men to advise their families of the incident.

Inspector John Ryan said: “We believe there were a number of young people swimming in the area during the afternoon. Two got into difficulty and the alarm was raised. All the services responded and two casualties were recovered from the water.”

It is understood the two boys had been in the water for up to 30 minutes before they were brought to the surface.

A Garda investigation into the incident is being carried out.

Gardaí­ later confirmed both boys had been pronounced dead in hospital.

It is known that at least one young man drowned at the same location in the early 1980s.

A number signs are visible in the area all warning people not to swim in the quarry. One reads: “Danger. Deep water. No swimming”. Another says: “Danger. Silt pond. Deep water. Keep clear”.

One local man said: “When I heard the sirens and saw the helicopter my heart just sank. I knew it was the quarry. I just knew it wasn’t good. The helicopter was on the ground for a good hour and took towards Limerick. It’s awful altogether.”

Two people were seen swimming in the same area just hours after the tragedy. The pair ignored warnings despite being told two people had been pulled out of there earlier.

One local said: “I roared at them. I told them two lads had been pulled out of there earlier. They told me it wasn’t their problem and just kept on swimming.”

Woman who took legal challenge in hotel quarantine released after negative Covid test 11:07
Teenage girl (18) jailed for a year for her role in petrol bomb attack 11:05
Covid-19 vaccine registration system to open for 65-69 year olds tomorrow 10:32
Covid-19 Vaccine Tracker: What's available in the Republic of Ireland and what else is coming? 10:32
Mandatory vaccination of healthcare workers would be ‘most intrusive step’ - regulator 10:28