Adoption controversy: ‘It was never discussed at home’ 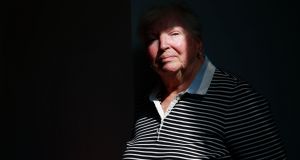 Susan Kiernan: “Even knowing about the circumstances and my mother’s identity would be good . . . as it would give closure from my point of view.” Photograph: Nick Bradshaw

In November 1949, a girl was born in the Sorrento nursing home at 7 Cabra Park in north Dublin. A few days later, she was baptised in Christ the King Church, Phibsboro, and taken by her parents to their home in Dalkey. But it was only a decade later that Susan Kiernan (or Susan Corr as she was before her marriage) discovered she was adopted.

It was not her parents who told her, but another girl in school. That fact must have been relatively well known in the area at the time.

“My adopted parents were the best people in the world,” recalls Kiernan (68). “But it was never discussed at home. My mum died when I was 12, my father died in 1997 but never really wanted to talk about it. He told me once that I was the one that was chosen and was special.”

When Kiernan approached 50 years of age she began searching for information on her background and natural mother. It was then she made a strange discovery. “My birth certificate had my adoptive parents’ names on it. When I saw it I did not think that was unusual as I did not know.”

In 1998, Kiernan wrote to the adoption board. Six days later she received a letter in reply stating that as she had a full birth certificate it meant her adoptive parents had registered as her natural parents.

“They told me that this had happened in a number of cases years beforehand which made it very difficult to help adoptees trace their natural parents,” says Kiernan.

She was told that as her adoptive parents had registered her birth, they had not applied to the adoption board. Kiernan, who now lives in Killiney, did not pursue it. She knew that other children had been born and passed off to adoptive parents in a similar way. At the time she went on the Pat Kenny Show, then on RTÉ Radio One. Subsequently, others in similar positions contacted her.

“When I think about it now in relation to what is happening it is quite shocking,” she says.

While Kiernan and her husband, Tom Kiernan, continued investigating they came to a dead end. The home, run by a midwife called Nurse Hickey, closed in the 1970s and there did not seem to be any records available to the public, besides one receipt that came to light from the late 1960s.

“I had hoped that maybe having registered with the adoption board that something might happen . . . I was upset at the time; I still think about it everyday. People often ask me and it is never out of my mind. I’m now 68 and the chances of my birth mother being alive must be very small.

“Even knowing about the circumstances and my mother’s identity would be good . . . as it would give closure from my point of view. I don’t really have any living relatives as such, as I was an only child.”