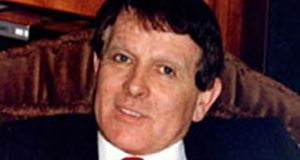 The two men arrested over the murder of Dessie Fox nearly 28 years ago have been released without charge by gardaí.

On Tuesday gardaí had arrested and questioned two men, aged 50 and 61, in connection with the unsolved murder of the bookmaker in 1990.

Following questioning the two men were released without charge by gardaí on Thursday. Investigating officers will now prepare a file for the Director of Public Prosecutions, who will make a decision on whether to take a prosecution.

The two men were arrested in the Dublin area, and questioned separately at Naas and Leixlip Garda stations.

Sources said one of the men was arrested for Fox’s murder while the other was arrested for unlawful possession of firearms relating to the incident. The two are believed to have been connected to the Irish National Liberation Army (INLA) at the time.

Fox, one of the country’s most successful on-course racing bookmakers, was driving from his home in Dungannon, Co Tyrone, to a race meeting at the Curragh when his car was intercepted by a number of armed men at Healy’s Bridge, Prosperous in Co Kildare on September 30th, 1990.

The father of three sustained a gunshot wound to his right thigh during the incident and died at the scene. There were also a number of gunshots to the car.

A black leather briefcase containing a large quantity of cash was stolen from Fox’s car, along with a canvas money bag, billheads with name, a portable car phone and car keys. The canvas bag and car phone were later recovered.

The man suspected of murder was taken from Cloverhill Prison to Leixlip Garda station on Tuesday for questioning.