Abolition of blasphemy offence favoured by 69% of voters – poll 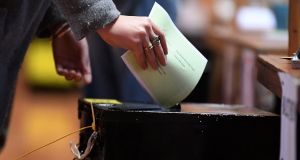 Blasphemy referendum: Irish Times/Ipsos MRBI exit poll predicts a majority for change across all ages and regions and among men and women. Photograph: Clodagh Kilcoyne

The referendum to remove the blasphemy provision is set to be carried by a landslide majority, the Irish Times/Ipsos MRBI exit poll suggests.

The total Yes vote is predicted to be 69 per cent for, with 31 per cent against. There is a majority for change across all ages and regions and among men and women.

However, there was a sharp drop in the Yes vote among the oldest voters.

The large majority suggests that concerns that a lack of voter engagement, as well as coverage and debate on the issue, could have led to a weak Yes vote were unfounded.

The poll was conducted among 4,365 respondents on Friday at 160 polling stations throughout the country, and has an estimated margin of error of +/-1.5 per cent.

The commitment to hold a referendum on removing the blasphemy provision was contained in the programme for government agreed between Fine Gael and a number of Independent deputies in 2016. This referendum was about the removal of the word “blasphemous” from the Constitution.

The Constitution states that citizens have the right to express freely their convictions and opinions, but there are certain limitations on that right. For example, under the Constitution the publication or the utterance of something blasphemous must be a criminal offence. Blasphemy is a criminal offence and the offence is defined in the Defamation Act of 2009.