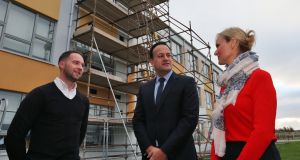 Taoiseach Leo Varadkar with Vivienne Bourke, principal of St Luke’s National School, and Tim Stapleton, principal of Tyrrelstown Educate Together, during a visit to the two schools which were closed this week over structrual concerns. Photograph: Colin Keegan, Collins Dublin.

The developer at the centre of controversy over school building standards has published “certificates of completion” it received from the Department of Education for schools which were ordered to shut this week.

The building firm has insisted that the Department of Education signed off on each project.

Western Building Systems (WBS) says certificates show each of the buildings was certified by representatives acting on behalf of the then minister for education.

The certificates relate to buildings at Ardgillan Community School in Balbriggan, Tyrrelstown Educate Together national school and St Luke’s national school in Mulhuddart, which are all in Dublin.

All three were ordered to close this week with immediate effect following structural safety concerns.

It said the role of department representatives during periodic site visits was as “client liaison”.

“This should not be construed as removing the responsibility from the contractor and its design teams for detailed quality control and certification of the buildings,” it said.

A spokesman said the certificates of substantial completion issued on behalf of the department were on the basis of assurances provided by the builder.

Safety checks, meanwhile, are being conducted over the coming days on more than 40 schools built over the past decade or more by WBS.

Officials working on behalf of the department are currently assessing the structural integrity of Letterkenny Educate Together national school.

It has not publicly disclosed when checks will take place on remaining schools, though the department is aiming to complete this before the end of the mid-term break

Concerns first arose over schools built by the WBS in 2015 when fire safety defects were uncovered.