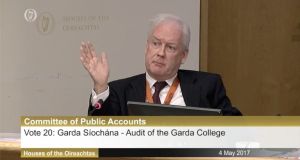 One of the most senior civilian staff members in the Garda, John Barrett, has been suspended from duty.

Mr Barrett, who is head of human resources and a member of the Garda’s executive, has clashed with a number of senior personnel in the force.

This request has now been acceded to and Mr Barrett has been suspended by the Garda. Because he is a senior member of the force and a civilian, Mr Harris needed to consult Mr Flanagan and secure his approval for the suspension.

In reply to a query from The Irish Times, Garda Headquarters declined to make any substantive comment on the case.

“This is an internal employment matter. An Garda Síochána will not be commenting further particularly on the identity of the individual,” Garda Headquarters said.

An unproven complaint about the alleged manner adapted by Mr Barrett in his dealings with a senior officer has been made by the officer in question.

According to sources, that complaint has been made by one of the most senior officers in the force and relates allegations about the way to his unease at the way he says Mr Barrett dealt with him face-to-face and in an email correspondence. Mr Barrett has declined to comment on such allegations to date.

A number of well-placed sources said Mr Barrett had brought significant value from the corporate sector into the Garda when he joined just over four years ago to lead the human resources function.

However, as well as the as yet unproven complaint by a senior officer, he has also recently clashed with one other senior officer and a fellow civilian member of senior staff in the force.

He featured in the report from the Disclosures Tribunal headed by Mr Justice Peter Charleton, who found much of Mr Barrett’s evidence “had an imaginative element”.

The findings of the tribunal are not a factor in Mr Barrett’s suspension, but consideration is being given to opening separate disciplinary proceedings in relation to them.

Mr Barrett has previously not shied away from criticising other senior personnel, doing so at Public Accounts Committee (PAC) meetings in proceedings streamed live to the public.

In May, 2017, Mr Barrett and then Garda commissioner Nóirín O’Sullivan contradicted each other’s version of accounts about a conversation they had in July 2015 about financial governance at the Garda College, Templemore.

Ms O’Sullivan said they had a very brief conversation at the college but Mr Barrett said it lasted hours and alleged the state of the college’s financial governance was discussed at length.

The discrepancies in their accounts were potentially crucial because a commissioner is obliged under the Garda Síochána Act 2005 to inform the Minister for Justice of matters that would undermine confidence in the force.

Also in May of last year, Mr Barrett described as “extraordinary” a claim that he may have been guilty of a crime for raising concerns about financial irregularities at the Garda College.

When appearing before the PAC, he was very critical of the Garda’s executive director of finance Michael Culhane for writing to Ms O’Sullivan suggesting that he, Mr Barrett, intentionally wanted to damage the force by raising questions.

Mr Culhane wrote to Ms O’Sullivan in October 2015 and questioned whether Mr Barrett had been unwittingly guilty of a criminal offence under the Official Secrets Act for expressing concerns about the finances at the Garda College.

Mr Culhane told the PAC hearing he had been concerned that Mr Barrett might have leaked details of the financial irregularities to the media.

“On behalf of our client, Mr John Barrett, we wish to say this suspension is unjustified. Mr Barrett will make no further statement at this time.”