Industrial action in third level colleges is suspended after deal 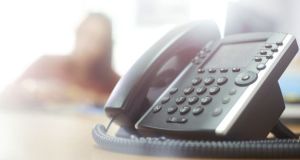 Fórsa said its members would not be making or taking phone calls, video conferencing or responding to or forwarding emails. Photograph: iStock

Industrial action which has been taking place in institutes of technology across the country and at Mary Immaculate College in Limerick has been suspended after the trade union Fórsa said it had secured agreement on a job evaluation scheme for staff.

Library, clerical and administrative staff at the State’s 14 institutes of technology have not been engaging in any form of communication including making and taking phone calls, video conferencing or responding to emails since last week.

Fórsa,which represents the staff concerned, said the move formed part of a campaign aimed at securing a comprehensive job evaluation exercise. Such an initiative could lead to staff receiving higher pay.

The Irish Times reported this week that there were fears that graduation ceremonies for thousands of students could face disruption as a result of the industrial action.

Fórsa said on Friday that talks at the Workplace Relations Commission(WRC) had “produced an agreement between the union and the Department of Education and Skills which makes provision for the commencement of a job evaluation scheme for library, clerical and administrative and support staff roles in the higher education sector”.

Fórsa official Andy Pike said the talks at the WRC had been constructive and had brought to an end a three-year delay on job evaluation, despite a commitment agreed in May 2015 as part of the negotiations that lead to the Lansdowne Road public service agreement.

“Our members have been waiting three years for this outcome. They showed their strong resolve by taking action. We’re satisfied that the measures agreed here today give our members a clear path to a comprehensive job evaluation scheme, and for that reason we are satisfied that it’s now appropriate to suspend the industrial action.”

Mr Pike said the purpose of job evaluation was to measure whether or not a specific post was correctly graded.

“It assesses the skills and responsibilities required of a particular post, rather than the individual performing it.

“Since 2008 the higher education sector has seen a very large increase in the number of students enrolled while staff numbers fell. There has been a corresponding increase in total productivity as library, professional and support staff took on the challenge of delivering services in these circumstances.

“The sector relied for a long time on the goodwill and dedication of its staff with many individuals assuming additional and more onerous duties. This situation was exacerbated by the failure to fill higher grade posts over the past number of years. In some cases posts were filled by agency staff on a temporary basis,” he said.